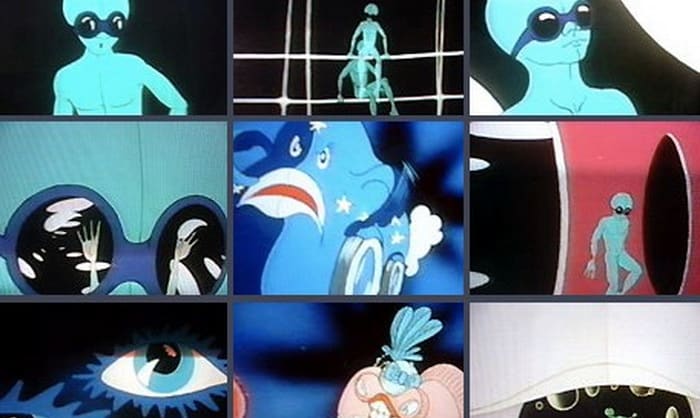 Ah, yes, “Autobahn.” From the moment the door slams and the ignition starts, prog rockers and pre-new wavers know a journey is afoot. Though the members of Kraftwerk made three albums before this, the members still looking like well meaning bookish hippies, 1974’s “Autobahn” is considered Year Zero for the denizens of the electric cafe, the four German robots who made human music with machines.

Created in 1979, but bopping around again in pop culture orbit is this cel-drawn animation by Roger Mainwood, created to promote “Autobahn” after most of the culture had caught up. By that last year of the ’70s Omni magazine was a year old, music was sifting through the shockwaves left by Bowie’s Low and Heroes, analog was flirting with digital, and the world was ready to drive on that long, electric highway. 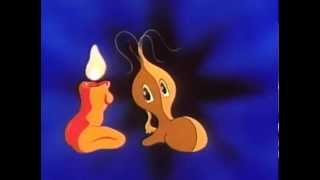 Mainwood’s protagonist is part alien, part human, and he begins looking around in awe in his hip goggles, then setting off for a run straight out of a Muybridge loop, only to wind up floating, flying, sailing and swimming through a landscape indebted to Peter Max, PushPin Studios, underground comix, and 1930 modernism.

Mainwood had just graduated from London’s Royal College of Art Film and Television School, and was commissioned by John Halas, the Hungarian immigrant who became known as the Father of British Animation, for Kraftwerk’s record label. The label wanted to put out one of the first music Laserdiscs. (Halas, by the way,directed a very UPA-influenced short called “Automania” in 1963). According to Mainwood, he still doesn’t know if the band liked the short or even if they watched it.

Mainwood avoided any direct representation of driving or automobiles, much to his credit, which may be why the film holds its fascination. The animator continued in his field, winding up a producer of several classics of British animation, includingThe Snowman and the chilling When the Wind Blows. As for the meaning of “Autobahn,” we’ll let Mainwood have the last word:

Thinking back to my thought processes at that time, I remember wanting to specifically not have conventional cars in the film. I wanted a sense of a repetitive journey, and alienation, which I took to be what the music was about…hence the solitary futuristic figure, protected by large goggles, moving through and trying to connect with the journey he is taking. The automobile “monsters” are deliberately threatening (I have never been a big fan of cars or motorways!) and when our “hero” tries to make human contact (with different coloured clones of himself) he can never do it. In the end he realises he is making the repetitive and circular journey alone but strides forward purposefully at the end as he did in the beginning. All of which sounds rather pretentious…but I was a young thing in those days!

The post: The Psychedelic Animated Video for Kraftwerk’s “Autobahn” from 1979, was published at: Open Culture