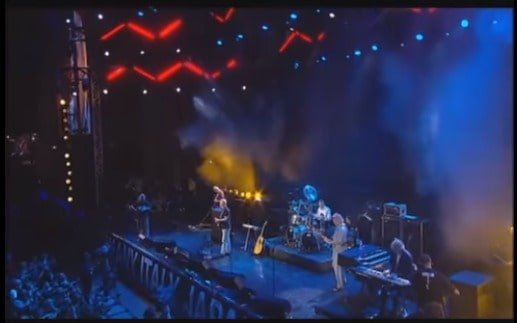 Exactly 10 years ago this week — on July 2nd, 2005, to be exact — the classic lineup of Pink Floyd reunited for a stunning four-song set at Live 8. It was their first time playing together since The Wall tour ended in June 1981, and the tragic death of Floyd keyboardist Richard Wright in 2008 means it’ll be the last time as well.

Pink Floyd hadn’t existed in any form for over a decade wen Bob Geldof began assembling a lineup of bands to play the international Live 8 concerts, which were designed to pressure the world leaders at the coming G8 summit in Scotland to dramatically increase their aid to poor nations. Twenty years earlier, Geldof commanded a great deal of media attention when he reunited Led Zeppelin, the Who, Black Sabbath and CSNY at Live Aid, so he knew reforming another legendary band would be crucial to the success of the shows.

Aware that David Gilmour would likely be the member of the band most opposed to the idea, he called him first — and was quickly shot down. Undeterred, Geldof hopped a train down to Gilmour’s home, and kept going when Gilmour phoned him midway through the trip to say, “Don’t bother.” Gilmour didn’t budge even after a home visit, so Geldof phoned up Floyd drummer Nick Mason next. “Bob asked if I could help broker a deal with David,” Mason wrote in his 2005 memoir Inside Out: A Personal History of Pink Floyd. “I said no, simply because I thought that adding my voice to the swell might not sway him — in fact, it might have completely the opposite effect.”

Mason decided instead to e-mail Roger Waters. The former bandmates were estranged for years, but a chance encounter three years earlier on the Caribbean island of Mustique lead to a renewal of their friendship. Waters was immediately down with the idea and phoned up Gilmour, who expressed fear that they didn’t have adequate time to rehearse and he was simply too out of practice. But just one day later, he called back and said he was willing to do it.

Richard Wright was quick to sign onto the plan after Gilmour agreed, and just 10 days before the show they group came together at the Connaught Hotel in London to craft a set list. Old tensions quickly resurfaced. “The first meeting was pretty stilted and cagey,” said Gilmour. “The songs that Roger wanted to do where not the same ones that I thought we should do. Roger wanted to do ‘Another Brick in the Wall,’ but I didn’t think it was appropriate. This was a thing for Africa and I didn’t think that little children in Arica should be signing, ‘We don’t need no education.’ There was no argument. I was absolutely right.”

Waters countered with the idea of playing “In the Flesh” and “Run Like Hell,” but the others felt they were too confrontational. They ultimately went with “Breathe,” “Money,” “Wish You Were Here” and “Comfortably Numb.” They were joined by guitarist Tim Renwick, keyboardist Jon Carin, saxophonist Dick Parry and backup singer Carol Kenyon.

The reunited Pink Floyd took the stage at London’s Hyde Park at 11:23 p.m., right after the Who. “It’s actually quite emotional standing up here with these three guys after all these years,” Waters said before ‘Wish You Were Here.’ “Standing to be counted with the rest of you. Anyway, we’re doing this for anyone that’s not here. But particularly, of course, for Syd [Barrett].”

The 24-minute set was the highlight of the entire worldwide concert. They could have easily taken the momentum and organized a worldwide reunion tour that would have earned all four of them unimaginable sums of money, but that didn’t even come close to happening. “I don’t really need it,” Waters told Rolling Stone one month after Live 8. “It would be a very hot ticket. That said, I didn’t mind rolling over for one day, but I couldn’t roll over for a whole fucking tour.”

That said, the show did help bring Waters and Gilmour marginally closer together. “[David] did send me an e-mail afterward,” Waters said. “It said, ‘Hi, Rog, I’m glad you made that phone call. It was fun, wasn’t it?’ So he obviously had fun.”

The Gilmour-led lineup of Floyd reunited in May 2007 at a Syd Barrett tribute show, and Gilmour and Mason joined Waters at one of his Wall shows in London four years ago. But Gilmour has made it abundantly clear that he’s done with Pink Floyd forever. “The thought of it makes me break out in a cold sweat,” he told Rolling Stone last year. “I’m an older person. I’m really enjoying my life. I’m really enjoying the music that I am making, and there’s no room for Pink Floyd.”