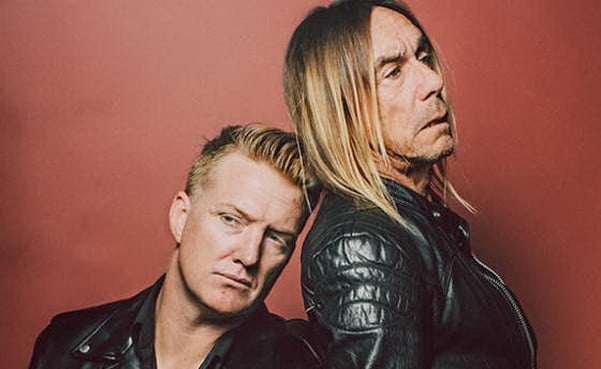 For those who love to explore the minutia of song writing and production,

Hrishikesh Hirway’s Song Exploder podcast is a godsend, and shows off the potential and power of this new media. Where else could one song get a 15 minute exploration of its meaning, writing, and recording, and from–as per this episode–Iggy Pop and Josh Homme themselves?

Iggy Pop, now 68 years old and with a voice more sepulchral than ever, has returned with Post Pop Depression, his 23rd album, his 17th as a solo artist. And according to this interview, it might just be his last. Homme, Queens of the Stone Age’s frontman, co-wrote and produced the album with Pop, and it is fair to say the collaboration is similar to those between David Bowie and Pop during the ‘70s. The instrument choice is odd and creative, with rock clichés avoided by two musicians who know them well.
In this episode, the two walk through the creation of the album’s centerpiece track “American Valhalla,” starting with Homme’s “Shitty Demo” (literally the title of the instrumental he sent to Pop) and delving into the lyric writing, Pop’s thoughts about veterans, mortality, the afterlife, and that final line, “I’ve nothing but my name.” Sure, Pop says it’s a character speaking, but it sounds a bit like an epitaph.
There’s many more surprises in this mini doc that we won’t spoil. Be sure to check out Song Exploder’s other episodes as well. Even if you’ve never heard of the song at the beginning, you’ll know it inside out by the end.

The post: Iggy Pop & Josh Homme Walk You Through How They Wrote Their New Song, “American Valhalla”, was published at: Open Culture

No Thoughts on Iggy Pop & Josh Homme Walk You Through How They Wrote Their New Song, “American Valhalla” – @Open Culture #iggypop #joshhomme0 (0)