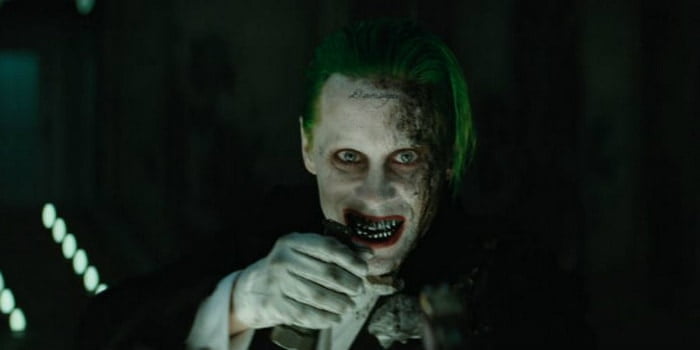 Over the course of the last year we have voraciously taken in any and all information related to the upcoming release of David Ayer’s Suicide Squad. This has been made all the more frustrating by the fact that Warner Bros. and DC have kept the thing we want to see most – Jared Leto’s Joker – relatively concealed throughout the film’s marketing campaign. As frustrating as this search for details has become, it seems that we won’t have to wait until movie hits theaters to see more of the character. We’ve just learned when we will next see The Joker, and it will come in the most unlikely of places.

According to a new report from Batman News, Jared Leto recently donned his Joker attire once more. The reason for the Clown Prince of Crime’s return? As it turns out: Jared Leto became The Joker again in order to shoot some scenes for a music video to accompany a Rick Ross and Skrillex collaboration. It’s unclear what the title of the song is, but we know that it will appear on the Suicide Squad official soundtrack when the film releases later this summer.

No release date has been announced for the music video, but we can likely estimate that it will drop sometime this summer prior to the release of the film. If you’re anything like us, you probably just got insanely excited about the prospect of seeing more of this version of The Joker.

Although no official cuts of the track have made their way to the Internet yet, the song did debut recently at a nightclub in Atlantic City. The quality of the video isn’t great, but you can check it out below to see for yourself:

It’s abundantly clear that Suicide Squad continues to eschew the more formal tone of movies like Man of Steel and Batman v Superman: Dawn of Justice. Ever since the first glimpse of Jared Leto’s Joker hit the web last year, we knew that Suicide Squad would opt for a more punk-esque, counterculture tone than most comic book movies. The inclusion of music by Rick Ross and Skrillex, while odd, certainly continues to fit that overall aesthetic and style.

Of course, some people don’t love the idea of The Joker popping up in a music video. Some folks on the Internet have openly mocked the marketing stunt, stating that it feels like Seal’s “Kiss From A Rose” music video that accompanied the release of Batman Forever in 1995. We will just have to wait and see how the final product turns out.

At this point we will take any glimpse of The Joker that we can get our hands on.Suicide Squad will hit theaters on August 6.

The post: Where You Can See Jared Leto’s Joker Before Suicide Squad, was first published at: CinemaBlend