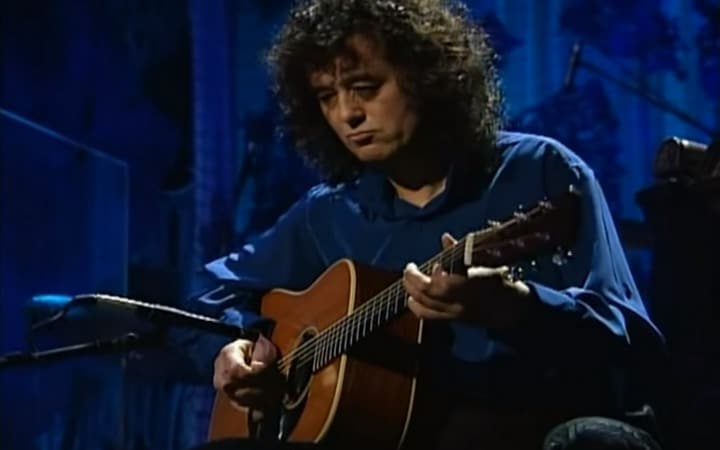 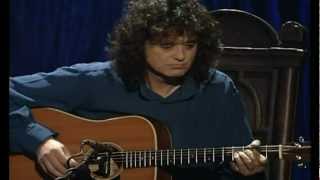 There are those who say Jimmy Page’s guitar playing went into decline near the end of the 70s for reasons that are in dispute, whether drugs, tendonitis, or a broken ring finger during a 1975 tour. (Thirty-two years later, he broke his pinky and had to delay a Led Zeppelin reunion.) Every musician goes through slumps. Page talked in a 1977 interview about an earlier such episode, during his session work in the sixties when horns and orchestras began to eclipse guitars, and he found himself “taking a back seat with just the occasional riff.” The experience made him reevaluate his career. “I didn’t realize how rusty I was going to get until a rock and roll session turned up from France, and I could hardly play.” 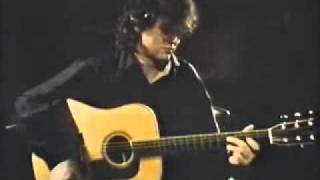 One thing that sustained Page in those low times was his acoustic playing. As a session player, he tells the ‘77 interviewer, “I had to do it on studio work, and you come to grips with it very quickly too, very quickly, because it is what is expected. There was a lot of busking in the early days, but as I say, I had to come to grips with it, and it was a good schooling.”

Though Page first started out playing in acoustic skiffle bands, he says his first guitar was a Grazzioso, “which was like a copy of a Stratocaster,” his next instrument a real Fender Strat, and his third, the “Black Beauty” Gibson Les Paul that he played on Zeppelin’s early studio sessions before it was stolen. It was his earlier session work that trained him as a disciplined, and underrated, acoustic player—and at times a profoundly inspired one. 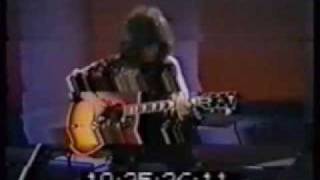 When, after almost ten years, Page reunited with Robert Plant in 1994 for a series of MTV Unplugged sessions (top), his acoustic playing was top notch. In other acoustic sessions from just a few years earlier (the 1989 video further up) a slightly out-of-it Page plays with quite much less subtlety and restraint, though he’s certainly still got the skill. But careless performances like these are not characteristic of Page’s true talents as an acoustic player. Ignore the poor video quality and listen to his incredible picking above on a 1970 broadcast of The Julie Felix Show in England. 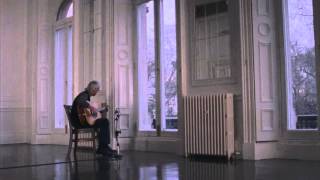 Page could showcase his lead playing, adapted to a folk idiom, on the acoustic guitar, but he has always excelled as a rhythm player as well. Just above, in an outtake from the 2008 documentary It Might Get Loud—while still recovering from that broken pinky finger—Page plays what Guitar World identifies only as “an uncredited instrumental” on a guitar that “appears to be in an open tuning, possibly C.” Whatever this composition, we can hear in these broad strums a whole rhythmic arrangement, with drum and bass parts and negative space drawn around the hints of melody. Page has always had one of the most thoroughly imaginative guitar styles in rock and roll, and when he steps back from his blues-based electric playing and embraces the acoustic guitar, he showcases how much the influence of various acoustic world and folk musics “gave Led Zeppelin a richness,” writes Stephen Erlewine at Allmusic, “unheard in their heavy rock peers.”