I am older than Evan Puschak, The Nerdwriter, one of a handful who have mastered the online video essay. But I still find myself agreeing with his take on the music video as mostly unnecessary and distracting. At least at first. Then I get nostalgic and remember some of the videos of my youth, like, say The Cure’s “Pictures of You” or Boyz II Men’s “It’s So Hard to Say Goodbye to Yesterday”—both bittersweet tracks about nostalgia—and I feel differently. The video can have a powerful emotional pull on us. But its power to sell music has perhaps never matched that of the album cover, even after the death of the record store. Puschak makes the case that The Beatles forever changed the form, making it into the “almost limitless” art we know today.

Another critic besides Puschak—one who remembers buying a first pressing of Sgt. Pepper’s Lonely Hearts Club Band—might be alleged to have fallen victim to a reverie. But there is nostalgia and there are qualitative historical arguments, and Puschak, a consummately careful, if exceedingly concise, essayist, makes the latter. In times past, he informs us, during the first few decades of the industry, record covers were more or less utilitarian brown paper bags, with some exceptions. Then came Columbia Records designer Alexander Steinweiss in 1938 to revolutionize album art, initiating a “huge boom in sales.” The market followed suit and record shops bloomed with color as album covers became little billboards for their contents. 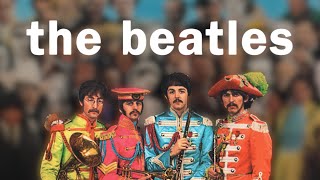 “Since music has no spatial dimension,” and we can’t hold it in our hands, “the album cover emerged as the stand-in for the commodity to be purchased. This explains the so-called “personality cover” featuring prominent band photos that look like portraits of actors’ troupes. It’s a convention The Beatles dutifully observed on their first few sleeves in the early sixties. As their stature increased, however, the band “seemed to become darkly aware of their status as commodities.” (Thus the glum looks on the cover of their unsubtly titled 1964 Beatles for Sale.)

Their evolution from the teenpop “personality cover” to the broody and surreal is self-evident, from Rubber Soul’s groovy band shot and psychedelic lettering to Revolver’s take on Aubrey Beardsley, courtesy of Klaus Vormann, “The Beatles were leaders in expanding an album cover’s function from a marketing tool to a work of art in its own right.” Then we come to Sgt. Pepper’s, and the shift is cemented. The album cover’s designer, Peter Blake, explicitly thought of the cover as “a piece of art rather than an album cover. It was almost a piece of theater design.” And the band themselves had a direct hand in its creation. “We all chose our own colours and our own materials,” noted McCartney.

They also chose most of the people on the cover (out of many who turned them down or didn’t make the final cut). By “juxtaposing highbrow artists and thinkers with pop icons,” says Puschak, “The Beatles signal the breakdown and mixing of high and low culture that they themselves exemplified.” What’s brilliant about the cover is that it taps into the band and the record buyer’s nostalgia with an open acknowledgement of the music as commerce. “We liked the idea of reaching out to the record-buyer,” McCartney recalled, “because our memories of spending our own hard-earned cash and really loving anyone who gave us value for money.”

But, as Puschak points out, the Sgt. Pepper’s cover also serves as its own critique. “By staging the scene as a performance and an audience,” he says, “the band challenges us to deal with the function of both.” That this message coincides with their decision to stop touring suggests that the band was using the album cover as they were using their music to draw the audience closer and give them the private emotional and aesthetic experiences so many inviting album covers now routinely promise. Designer Blake and the band encouraged listeners to have an intellectual relationship with the record from the very start, with the cryptic who’s-who puzzle photomontage of famous people and the lyrics printed directly on the back. In so doing, they announced that although recorded music was inescapably a commodity, it was also, inseparably, a modern art.

What Does the World Oldest Surviving Piano Sound Like?: Watch Pianist Give a Performance on a 1720 Cristofori Piano @Open Culture
0 (0)