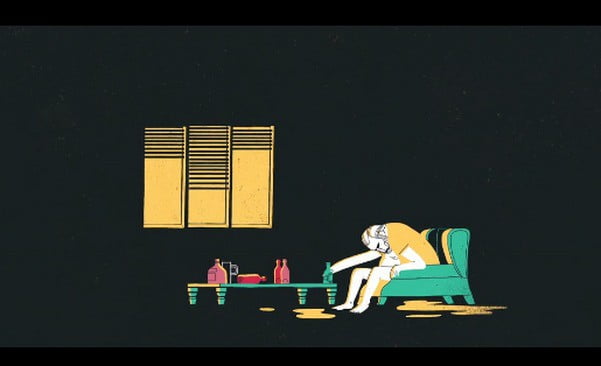 Charles Bukowski could really write. Charles Bukowski could really drink. These two facts, surely the best-known ones about the “lowlife laureate” of a poet and author of such novels as Post Office and Ham on Rye (as well as what we might call his lifestyle column, “Notes of a Dirty Old Man”), go together. Drinking provided enough of the subject matter of his prose and verse — and, in life, enough of the fuel for the existence he observed on the page with such rough-edged evocative artistry — that we can hardly imagine Bukowski’s writing without his drinking, or his drinking without his writing.

We would naturally expect him, then, to have written an ode to beer, one of his drinks of choice. “Beer,” which appeared in Bukowski’s 1971 poetry collection Love Is a Dog from Hell, pays tribute to the countless bottles the man drank “while waiting for things to get better,” “after splits with women,” “waiting for the phone to ring,” “waiting for the sounds of footsteps.” The female, he writes, knows not to consume beer to excess in the male manner, as “she knows its bad for the figure.” But Bukowski, figure be damned, finds in this most working-class of all drinks a kind of solace.

“Beer” comes to life in the animation above by NERDO. “The composition is a manifesto of the author’s way of life, this is why we decided to go inside the author’s mind, and it is not a safe journey,” say the accompanying notes. “A brain solo without filter, a tale of ordinary madness, showing how much loneliness and decadence can be hidden inside a genius mind.” This wild ride passes what we now recognize as many visual signifiers of the Bukowskian experience: neon signs, cigarettes, decaying city blocks, tawdry Polaroids — and, of course, beer, literally “rivers and seas of beer,” which no less a fellow animated enthusiast of the beverage than Homer Simpson once, just as eloquently, pronounced “the cause of, and solution to, all of life’s problems.”

“Beer” will be added to our collection, 700 Free Audio Books: Download Great Books for Free.

The post: Watch “Beer,” a Mind-Warping Animation of Charles Bukowski’s 1971 Poem Honoring His Favorite Drink, was published at: Open Culture

Paul Thomas Anderson Directs a Music Video for the New Radiohead Album, Which Is Out NOW! – @Open Culture
0 (0)