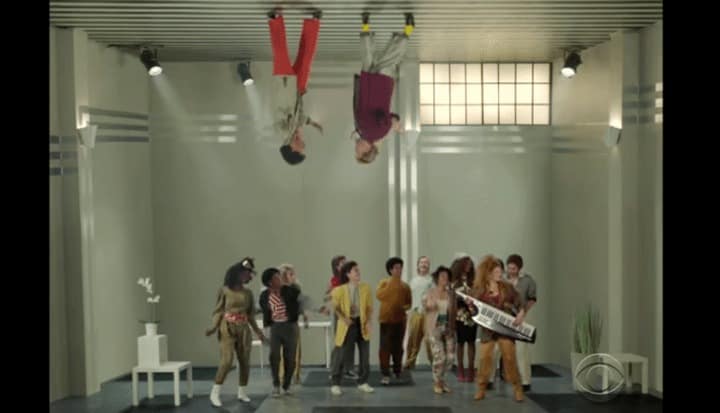 Lionel Richie and James Corden in Goofy Dancing on the Ceiling

In the segment, Corden defies gravity with Richie as they literally sing hanging from the ceiling, just as the singer did in the original clip. But something goes wrong – when Corden gets stuck upside down.

Richie takes advantage of his immobile host, spraying him with ketchup and mustard, attempting to knock him off the ceiling by throwing a soccer ball, a computer keyboard and an old telephone. He also sings a few lines of other hits, including “Stuck on You” and “All Night Long,” before heading out and leaving Corden to fend for himself.

“Dancing on the Ceiling” came out in 1986 when Richie was in the middle of a remarkable hot streak: between 1981 and 1987, he scored 13 top ten singles on the Hot 100, including five that went to Number One.

In the interview portion of the show, Richie told Corden that he loves when fans botch the names of his biggest hits (“Three Times A Woman,” “Dancing on the Wall”). One fan, Adele, stands out, he said smiling, because she put him in her video for her mega-hit, “Hello.” 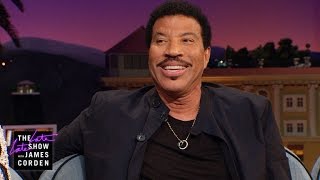 No Thoughts on See Lionel Richie, James Corden in Goofy ‘Dancing on the Ceiling’ Spoof0 (0)