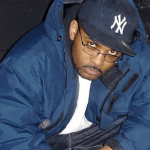 Throughout the last 25 years, Large Professor tracks have maintained the gravitas to introduce Hip-Hop Heads to the likes of Nas, Mobb Deep, Akinyele, Non-Phixion, Mad Skillz, and REKS, among others. Powerule is a veteran MC, who many listeners are still coming around to discover.

He has appeared on a number of the In Ya Ear Recordings compilations alongside New York City Rap royalty, before leading up to his own The Anomaly album. Released in March of this year, the indie LP features The Beatnuts’ Psycho Les, Kurious Jorge, and Extra P himself.

Single “Glorify and Praise” finds Powerule breaking south to central Florida to clear his mind and evade the stresses in a motel room. There, the tight-flowing MC raps verses about trying to get right amidst the wrongs, maintaining righteousness, and staying street-sophisticated. Large Pro’s beat knocks with a rich arrangement and steadfast drums. The legendary sampler and ear for talent also appears in the video and contributes some quick vocals.