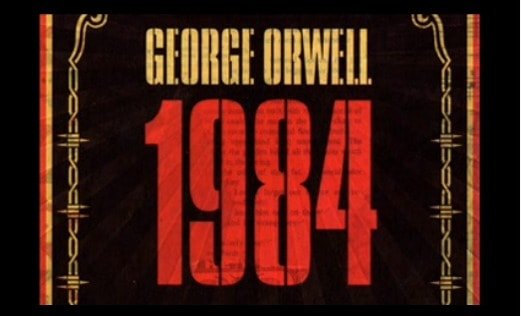 Take two of the most prominent English cultural properties of the past several decades, bring them together, and what have you got? You’ve got Patrick Troughton, better known as the Second Doctor in TV’s Doctor Who, in a 1965 BBC Radio adaptation of George Orwell’s 1984. Troughton was not yet the Doctor; the honor would not fall to him until the following year when he replaced William Hartnell (with the latter’s full approval, it seems). But he was a well-known character actor, the first to play Robin Hood on television (in a 1953 BBC mini-series), and a figure who inspired a good deal of respect in the British entertainment industry. Troughton was also a decorated World War II veteran (who, when the year 1984 finally arrived, suffered his second major heart attack).

Troughton brings to the role of everyman Winston Smith a gravitas shared by a number of actors who have inherited the role since the very first radio adaptation in 1949, starring David Niven. Of course Orwell’s story is not an ongoing series likeDoctor Who, but it has remained remarkably relevant to every generation post-World War II, and like the Doctor’s character, has been constantly re-imagined in adaptations on radio, film, and television. The conditions of government repression, censorship, and mass surveillance Orwell foresaw have seemed imminent, if not fully realized, in the decades following the novel’s 1948 publication, though the adjective “Orwellian” and many of the novel’s coinages have suffered a good deal throughoveruse and misapplication.

Just as the first radio play of 1984 warned of a “disturbing broadcast,” this 1965 version begins, “The following play is not suitable for those of a nervous disposition.” It’s interesting that even this long after the novel’s publication, and in the midst of the swinging sixties, Orwell’s dystopian fable still had the power to shock. Or at least the producers of this broadcast thought so. Perhaps we’ve been so thoroughly inured to the prospects Orwell warned of that revelations of the NSA’s massive data collection, or of the global expropriation disclosed by the Panama Papers, or of any number of nefarious government dealings often elicit a cynical shrug from the average person. Those who do express alarm at such documented abuses are often branded… well, alarmists.

But then again, we keep returning to Orwell.

Continuing in the tradition begun by David Niven and carried forward by Patrick Troughton (and on film by Edmond O’Brien and John Hurt), another respected British actor recently took on the role of Winston Smith in a BBC 4 radio adaptation three years ago. This time the actor was Christopher Eccleston, who also, it turns out, once played Doctor Who.

The post: Hear a Radio Drama of George Orwell’s 1984, Starring Patrick Troughton, of Doctor Who Fame (1965), was published at: Open Culture

If This Graffiti Simulator Were Any Realer, It Would Be Illegal (Video) – @AFH Ambrosia for Heads
0 (0)