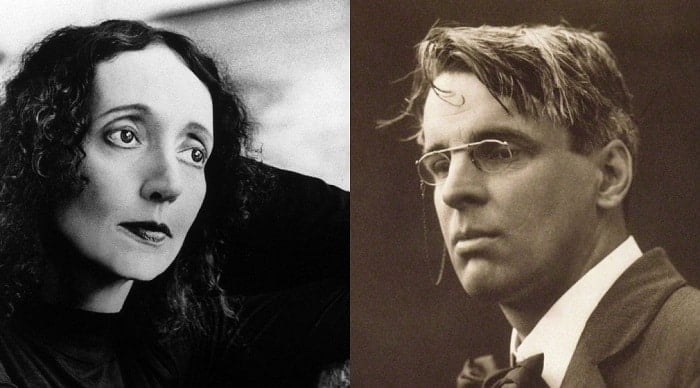 Working a century apart, the Irish poet William Butler Yeats and the American novelist Joyce Carol Oates might seem to have little in common. On the occasion of their birthdays — which happen to be just a few days apart — we have assembled a sampler platter of quotations reminding us of Yeats’s uncanny ability to propel his thoughts ever-forward into the future, and Oates’s spiritual kinship to the lyrical poets of yesteryear. (As fate would have it, Yeats died just six months after she was born).

As a bonus, below you’ll also find The Cranberries’s musical tribute to Yeats circa 1994; by dazzling coincidence, at that time Oates would have been hard at work on her novel called Zombie.

W.B. Yeats, The Wind Among the Reeds, 1899
“But I, being poor, have only my dreams;
I have spread my dreams under your feet;
Tread softly because you tread on my dreams.”

W.B. Yeats, “If I Were Four-and-Twenty,” printed in Irish Statesman, 1919
“One day when I was twenty-three or twenty-four this sentence seemed to form in my head, without my willing it, much as sentences form when we are half-asleep: ‘Hammer your thoughts into unity.’ For days I could think of nothing else, and for years I tested all I did by that sentence.”

Joyce Carol Oates, A Widow’s Story, 2011
“There is an hour, a minute — you will remember it forever — when you know instinctively on the basis of the most inconsequential evidence, that something is wrong. You don’t know — can’t know — that it is the first of a series of ‘wrongful’ events that will culminate in the utter devastation of your life as you have known it.”

W.B. Yeats, “The Sorrow of Love,” 1893
The brawling of a sparrow in the eaves,
The brilliant moon and all the milky sky,
And all that famous harmony of leaves,
Had blotted out man’s image and his cry.

W.B. Yeats, “No Second Troy,” 1916
“Why should I blame her that she filled my days
With misery, or that she would of late
Have taught to ignorant men most violent ways,
Or hurled the little streets upon the great,
Had they but courage equal to desire?”

Joyce Carol Oates, Foxfire: Confessions of a Girl Gang, 1993
“The strangeness of Time. Not in its passing, which can seem infinite, like a tunnel whose end you can’t see, whose beginning you’ve forgotten, but in the sudden realization that something finite, has passed, and is irretrievable.”