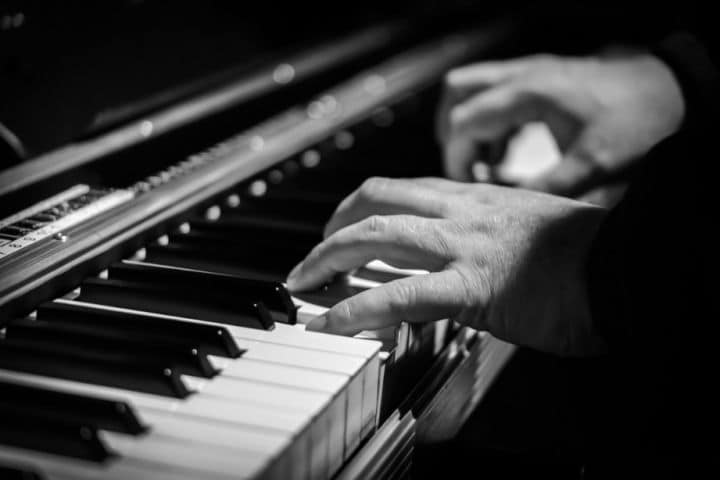 In this article, I am going to take a brief survey of some of the more famous piano solos from the world of Jazz. This is not a simple task as if we accept that the Blues was the root of all Jazz music then there is a substantial catalogue of works from which to choose.

Many earlier pieces may have never been recorded or notated, and if not passed down the generations by ear then possibly lost to us now. As such I will confine my list to those pieces that are available in either printed or recorded form for you to enjoy and research further.

1. The Entertainer by Scott Joplin

One of the earliest forms of Jazz music was Ragtime music. This compelling style of music neatly fused the music of black and white culture into one new musical style. In Ragtime we hear the syncopation, or off-beat, rhythms that feature in early black music combined with the marching band music of the white musicians.

Scott Joplin was a pianist, composer and teacher who cleverly brought these two very opposite cultures together in a series of extremely successful and popular piano pieces called simply: Rags. “The Entertainer” was one of the 44 original Rags Joplin composed in his brief lifetime. It was composed around 1902 and published in 1910 with the first recording supposedly made by The Blue Boys on mandolin and guitar in 1928.

2. A Handful of Keys by Thomas ‘Fats’ Waller

This piece could almost be thought of as Fats Waller’s signature tune. The solo piano piece was written by Waller in the late 1920s and epitomises the Harlem Stride Piano style. Fats Waller was a gifted pianist and composer and on hearing a performance of this piece you can easily understand why. The stride style of playing effectively called for the pianist to play the bass notes and the chords of the piece using only their left hand. The distance from bass note to chord could cover a significant distance over the keys of the piano, so it became known as striding.

The right hand then, covered the melody and harmony too often with full four or five note chords so that the piano is playing all the parts that would usually be performed by a larger group of musicians. The Handful of Keys is an entertaining and challenging work to play that beautifully illustrates Fats Waller’s unique piano style and his wit.

3. I Got Rhythm by George Gershwin

This is perhaps one of the most famous pieces that Gershwin composed. The recording above is rare footage of the composer himself playing his work, probably as he originally intended. I Got Rhythm was published in 1930 and came from the musical “Girl Crazy”. Surprisingly the original version of the song was to be a slow number for “Treasure Girl”, but the version we have come to recognise and love, for me is the more credible. The entire piece is based on a pentatonic scale with the original key being D flat major. Throughout the piece, there are traits of the inimitable Gershwin style with twists of rhythmic emphasis and subtle variations on the original tune.

Erroll Garner was a pianist and composer who came to fame during what is often called the swing era of Jazz in the 1940s. His style of piano playing encapsulated the stride technique of earlier pianists but it was Garner’s abundant virtuosity and lyrical fluency that characterised his performances. “Misty” was composed for the album called “Contrasts” in 1954 and follows a traditional thirty-two bar structure common to many Jazz standards. The piece became immensely popular as a lyrical ballad and was championed by Jonny Mathis on his album titled “Heavenly” with lyrics by Jonny Burke.

5. Take the A Train by Billy Strayhorn

This Jazz Standard became the signature tune for Duke Ellington and his band. The assumption by many who heard it was that Ellington himself has written the tune as he was a composer and pianist, but it was commissioned Ellington from Strayhorn in 1939 following Strayhorn’s acceptance of a job with Ellington’s organization. The A Train in the title is in reference to what was a new A subway train that ran through New York.

As a composition, the piece falls neatly into the era of swing and is structurally in an A-B-A form. Later recordings by the singer Ella Fitzgerald from 1957 ensured the popularity of this wonderful composition.

6. Lullaby of Birdland by George Shearing

This track became Shearing’s theme for the majority of his long career. The song was published in 1952 and had lyrics added by George Weiss, bringing a whole new set of performers to the work including Mel Tormé, Sarah Vaughn and Ella Fitzgerald. The title of the song refers to Charlie ‘Bird’ Parker and the famous club that became known as Birdland after the great saxophonist.

Shearing himself was consummate be-bop pianist and accomplished improviser. He was known for his ‘locked-hands’ style of playing that in its simplest form means the melody is played in both right and left hands, usually doubled at the octave. This gave Sheering a sound that became very much his own and you can hear to an extent in this recording. Lullaby of Broadway like so many standards before, exploits the typical AABA structure.

Pianist/composer Dave Brubeck shot to fame with a track called “Take Five” that was in fact written by his long-term alto saxophonist Paul Desmond. The Blue Rondo is a composition that was written by Brubeck himself and has become a somewhat iconic Brubeck piece. This is largely because of its uneven division of the 9/8 time signature into a 2+2+2+3 grouping. Brubeck claimed to have heard a Turkish group of musicians playing this rhythm and then used it in a composition of his own.

In contrast, the second section of the piece is in a standard blues-feel swing time. Brubeck then cleverly combines both musical ideas before leading back to the original material. The Brubeck quartet became known for music in odd time signatures and with extended harmonies that often reflected Brubeck’s academic study of music.