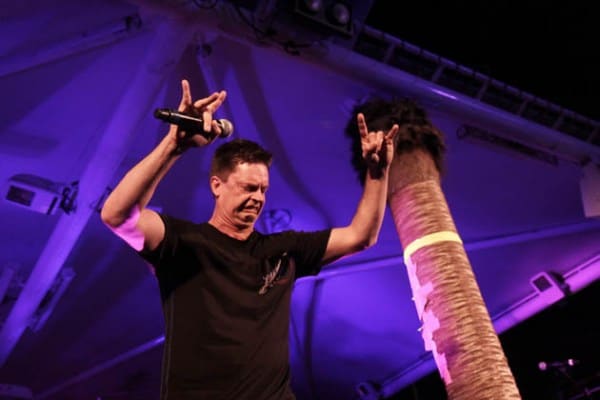 It has been nearly a year since it was revealed that AC/DC’s Brian Johnson would appear on comedian Jim Breuer’s upcoming album, and the release details of that disc have now been announced.

Jim Breuer and the Loud & Rowdy will release Songs From the Garage on May 27 via Metal Blade Records. The album art and track listing are below. Breuer and his band have also released a new song, “Be a Dick 2Nite,” and you can check it out in the video player above. In addition to Breuer, the lineup also includes Rob Caggiano (Volbeat) on guitar and production duties, Metal Mike (Halford) on guitar, Mike Tichy on drums and Joe Vigliotti handling bass.

Breuer says, “I basically want the crowd to have a blast, and I write what I feel that I would love if I was in the crowd. So, going into the record the music had to be killer and have great hooks, that was most important, and I wanted to balance that with something that’s funny. I wanted to bring the smile back to hard rock that has a nice punch to it — and in doing so hopefully bridge the gap so my generation and their kids will come see this live together!”

Johnson appears on two songs: “My Rock n Roll Dream” and “Mr. Rock n Roll.” Breuer is excited about the legendary singer’s appearance on the album. “When Brian actually started recording is when things became surreal — I mean it’s Brian Johnson,” Breuer exclaims. “Hearing his voice and watching him record with a handheld microphone, that’s the only time I geeked out. To me he’s a great man, and I can listen to him tell jokes and stories about history all night long.”

Breuer continues, “When I’m with him it’s no different than hanging with your favorite uncle that you love to death, and he trusted me to do the right thing and make this good. I hope I have honored his trust. That means more to me than the song, to be honest.”

Pre-orders for Songs From the Garage are available at this location.

Jim Breuer and the Loud & Rowdy, Songs From the Garage Track Listing:

The post: Jim Breuer Album, Featuring Guest Appearance by Brian Johnson, Set for May Release, was published at: Loudwire