A loose association of mid-20th century artists including at times John Cage, Yoko Ono, and Joseph Bueys, the Fluxus group produced a lot of strange performative work and anti-art stunts influenced by similar provocations from earlier Dada artists. The movement’s “patron saint,” Martha Schwendener writes at The New York Times, was Marcel Duchamp, whose “idea of art (or life) as a game in which the artist reconfigures the rules is central to Fluxus.” Also central was Duchamp’s concept of the “ready-made”—everyday objects turned into objets d’art by means part ritual and part prank.

We can think of the piece above in both registers. György Ligeti’s Poème symphonique, a composition involving 100 metronomes and ten operators, fit right in with Fluxus during Ligeti’s brief association with them. Written in 1962—and yes, it has a written score—Ligeti’s piece “owes much of its success to its presentation as a ridiculous spectacle,” writes composer Jason Charney, who has made a digital recreation. Ligeti provides specific instructions for the performance.

These are followed almost to the letter in the video at the top of the page, with the added bonus of holding the performance in a Gothic church. What does it sound like? A cacophonous racket. A waterfall of typewriters. And yet, believe it or not, something interesting does happen after a while; you become attuned to its internal logic. Patterns emerge and disappear in the reverberation from the church walls: A wave of robot applause, then soothing white noise, then a movement or two of a factory symphony…. 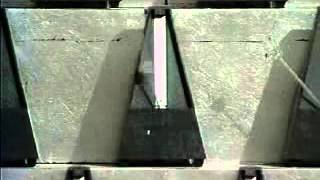 “The score,” notes Matt Jolly, who shot the video, “calls for a long silence and then up to an hour of ticking. We decided to shorten this considerably. The metronomes are supposed be fully wound but we had to limit that to 13 turns on average.” The ingenuity of Ligeti’s piece far surpasses that of any mere prank, as does the logistical and material demand. The composer fully acknowledged this, providing specifics as to how performers might go about securing their “instruments,” hard to come by in such large quantity even in 1962. (Mechanical metronomes are now all but obsolete.) Charney quotes from Ligeti’s helpful suggestions, which include enlisting the services of an “executive council of a city, one or more of the music schools, one or more businesses, one or more private persons….”

I doubt he meant any of this seriously. Dutch Television canceled a planned 1963 broadcast of Poème symphonique from an early performance in the Netherlands. The event included speeches by local politicians and an audience who had no idea what to expect. As you might imagine, they did not react favorably. Like the earlier anti-art Ligeti’s idea draws from, he explicitly framed the composition as “a special sort of critique,” whose score is “admittedly rather ironic” and in which he rants vaguely against “all ideologies” and “radicalism and petit-bourgeois attitudes” alike. How seriously he means this is also anyone’s guess. And yet, prank or art, people continue to perform the piece, as in the even shorter rendition above, which goes even further in removing the human element by designing a machine to start all the metronomes simultaneously.

Proust on Love and How Our Intellect Blinds Us to the Wisdom of the Heart – @Brainpickings.org0 (0)

Rising: Kelsey Lu ’s Dreams Are Better Than Yours – @Pitchfork0 (0)