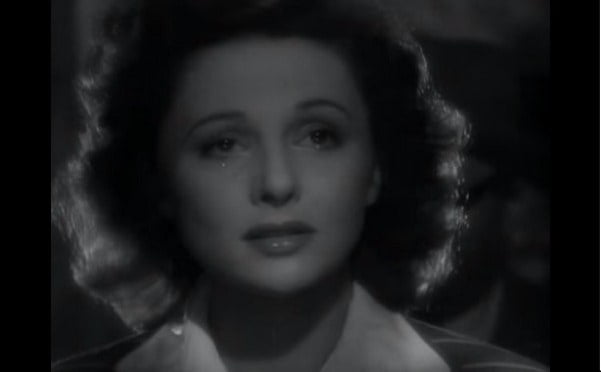 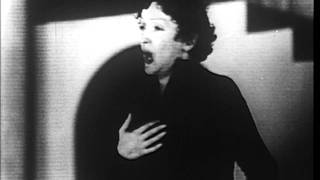 On the 100th anniversary of Édith Piaf’s birth last December, writes Jeremy Allen at The Guardian, “celebrations… were low key…. Piaf is a little out of fashion with today’s jeunesse dorée.” That’s a little hard to believe, but if Piaf has fallen out of favor with wealthy French youth, her star has continued to shine, year after year, for much of the music- and film-loving world.
Her story has been told in numerous documentaries and biopics, including the multiple-award-winning La Vie en rose in 2007, whose lead actress, Marion Cotillard, received the first Oscar given for a French-speaking role. Celebrated in song, in print, in photographs, and in many a stage tribute—such as Lady Gaga’s performance of her signature song, “La Vie en rose,” at last year’s Grammy awards—Piaf has “influenced everyone from Marianne Faithfull to Anna Calvi, and Elton John,” not all of whom are themselves in fashion these days. 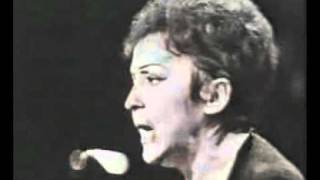 And yet, writes Allen, “to paraphrase an old footballing cliché, fashion is temporary, class is permanent.” If there’s anything Piaf’s voice and presence have exemplified over many decades, it is that indefinable quality of “class,” which transcends economic divisions and the ramblings of tacky would-be politicians and encompasses rather a mix of graceful self-possession, artistic integrity, and timeless elegance.
She certainly would not have been mistaken, in her youth, for one of those fashionable jeunesse dorée. The daughter of a street singer who abandoned her, Piaf learned her craft by also singing on the streets, “in a Bellevilloise argot apparently not dissimilar to a Parisian version of old cockney,” Allen writes. The dramatic circumstances of her life were “a punk opera decades before the genre exploded….. From growing up in a bordello, to spending four years blinded by keratitis in her infancy, to joining her acrobat father on the road in her teens, to shooting up morphine, cortisone and falling into alcoholism to alleviate a dodgy back sustained in a car crash as an adult (precipitating what she described as her ‘years of hell’).” 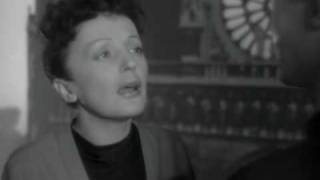 Through it all, writes Open Culture’s Mike Springer, “Piaf managed to hold onto a basically optimistic view of life.” Such a view, always tinged with rueful sadness, comes through in her performances of, for example, “La Vie en rose” (which roughly translates to “life through rose-colored glasses”). See her perform the song at the top of the post on French TV in 1954. “She was 38 years old,” writes Springer, “but looked much older” due to her alcoholism and various treatments for her drinking and arthritis. Below this video, in a filmed performance of “Non, je regrette rien” (“I regret nothing”), Piaf’s hard life seems etched on her expressively sorrowful face, but her voice did not suffer for it, nor her willingness to perform until the end of her short life (she died in 1963 at age 47).
Piaf dedicated “Non, je regrette rien”—composed for her in 1956 by Charles Dumont and Michel Vaucaire—to the French Foreign Legion, who adopted it as their anthem. Its title becomes particularly poignant in light of Piaf’s storied life, especially given the accusations after the Nazi occupation that she had collaborated with the Germans. Instead, it was revealed, writes a New York Times profile, that while she performed for German troops, she “was instrumental in helping a number of prisoners escape,” rendering “aid that later saved her from any charges of collaboration.” Piaf became an emblem of Parisian culture, and appeared in several films, such as 1951’s Paris Chante Toujours (“Paris still sings,” above—she sings “Hymne à l’amour.”) 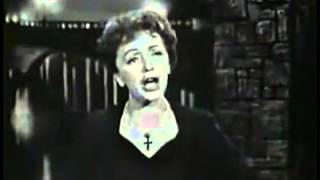 She also became—after surviving a first, disastrous 1947 appearance in New York—a star in the U.S. in the 50s. In 1959, she appeared on The Ed Sullivan Show and sang “Milord” (above), partly in English, a song that briefly reached the Billboard top 100. Piaf would appear a few times on Sullivan’s program throughout the decade. In 1952, she held her own with American audiences in a lineup that included the hugely popular Bobby Darin and the fiery Ike and Tina Turner. Despite her diminutive stature (she stood just 4’8″) and often frail physical condition, Piaf’s world-weary demeanor and smoldering voice stood out in any company. (See her with Marlene Dietrich below in 1954 on the French program “La joie de vivre.”) She was a true original and there has never been another performer quite like her. 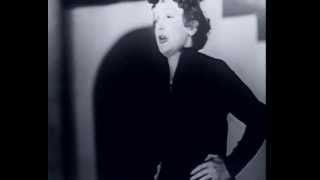