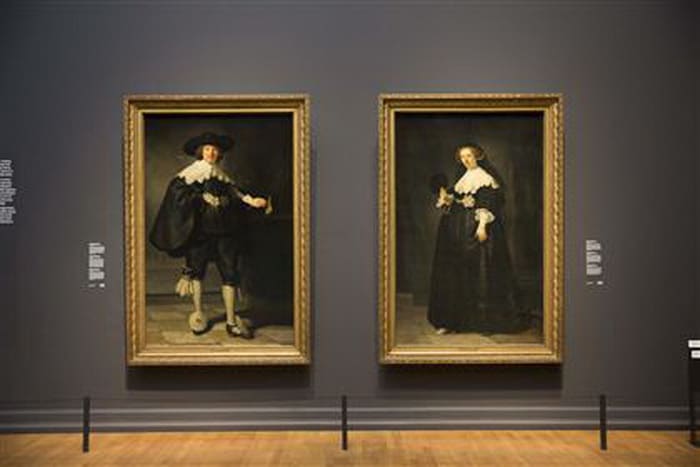 From 2 July 2016 until 2 October 2016, Rembrandt’s wedding portraits of Marten Soolmans and Oopjen Coppit, will have a place of honour alongside his ‘Night Watch’ in the Rijksmuseum.

Early this year two exceptional Rembrandt portraits were bought together by the Netherlands and France, a unique event. Rembrandt painted the masterpieces of the newly-weds Marten Soolmans and Oopjen Coppit in Amsterdam in 1634, when he was twenty-eight. The portraits, more than two meters high, remained in private hands for almost four centuries.

Wim Pijbes, General Director Rijksmuseum: “What no one thought possible is now reality: the most wanted and least exhibited Rembrandts in the world, in the Louvre and the Rijksmuseum in turn, in the public domain and within everyone’s reach”.

Rembrandt van Rijn (1606-1669)
Portraits of Marten Soolmans and Oopjen Coppit, 1634.
Joint purchase by the Kingdom of the Netherlands and the Republic of France. Photo Werry Crone

Jet Bussemaker, Minister of Education, Culture and Science:“I’m delighted because the paintings are now finally in public hands. They belong to us all, and everyone, young and old, can enjoy them. I would say – go and see them!”

Who exactly were Marten and Oopjen? Jonathan Bikker, Rijksmuseum curator, carried out extensive research into the two portraits by Rembrandt. Among other things, he established the subject’s name is Marten and not Maerten, as was always assumed. All his findings have been published in “Two Monumental Portraits by Rembrandt”; 52 pages; Dutch and English editions. On sale from July in the Rijksmuseum shop for €15.