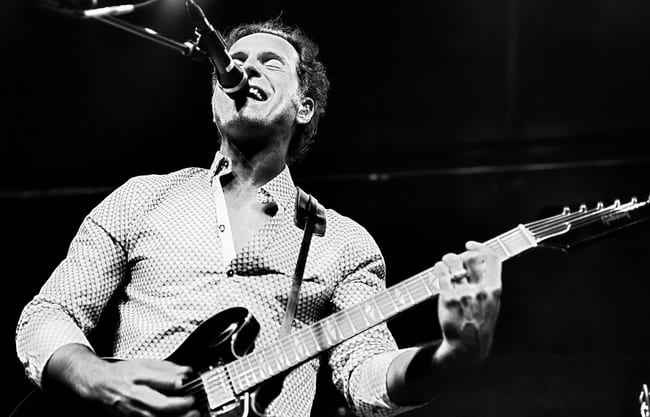 Branding Dweezil’s story that he was forced to change the name of his Zappa Plays Zappa show to Dweezil Zappa Plays Frank Zappa as “incomplete and misleading,” Ahmet points out that Dweezil only has to pay a $1-a-year fee to using the original show name and “follow the exact same rules as the rest of us.”

But Dweezil has issued a statement of his own suggesting his brother’s “actions speak louder than words,” accusing him of “contradictions and unsubstantiated half truths.” He also launches a tirade against the “bogus” contract, alleging their late mother Gail created an “unfair and unacceptable working relationship” by reneging on their deal and withholding merchandise profits from his shows over the last 10 years.

Dweezil also claims their late mother, who managed Zappa’s estate until she died last year, left a “legacy of multi-million dollar debt-inducing lawsuits” in a bid to trademark everything connected to the late rock icon. He says Ahmet is “continuing the injustice” by not honouring the original contract.

He says: “Unfortunately your actions speak louder than the words you’re using to spin this. You have demanded that the ZFT would take 100% of the tour merchandise revenue.

“In a little twist, you have suggested that after the trust pays off its debts, then I would receive my 20% share of what is left over – a mere fraction of what I am owed per the contract. This non-negotiable demand that I am solely responsible for all touring and rehearsing expenses, yet will receive 0% of the tour merchandise – and no retroactive payments of merchandise money that the trust has owed me since 2006, all in exchange for paying $1 for the license to use the name Zappa Plays Zappa – is not a deal.

“If this proposition wasn’t so laughable, I’d consider it an insult. Your $1 deal to use the name but take all of the merchandise is unacceptable.

“If I was to tour under the name Zappa Plays Zappa and not pay you 100% of the merchandise money, you threatened to sue me for copyright infringement of $150,000 per musical infraction. The deal you keep referring to is one that I had already rejected as being ludicrous and unfeasible.”

Dweezil also claims that, given that he and his sister Moon have a 20% stake in the trust compared to Ahmet and Diva’s 30% share as trustees – they would directly benefit more from his own work than he would. He then takes aim at the lack of transparency over the trust’s endorsement of an “autonomous” Zappa film project launched by director Alex Winter.

Dweezil adds: “What quality control standard are we as the Zappa family to expect from this project? Our father was all about integrity, and without being given any information from you or Diva, I find this to be very confusing.

“It appears you’re just giving our father’s image and life’s work away to a stranger for nothing. I can think of two immediate family members that wouldn’t be considered for an autonomous deal like that.”

The next round of reissued Zappa albums, Lumpy Money Project/Object and theRoad Tapes collections, will launch on May 28.

The post: Dweezil Zappa hits back at brother Ahmet’s open letter, was published at: TeamRock