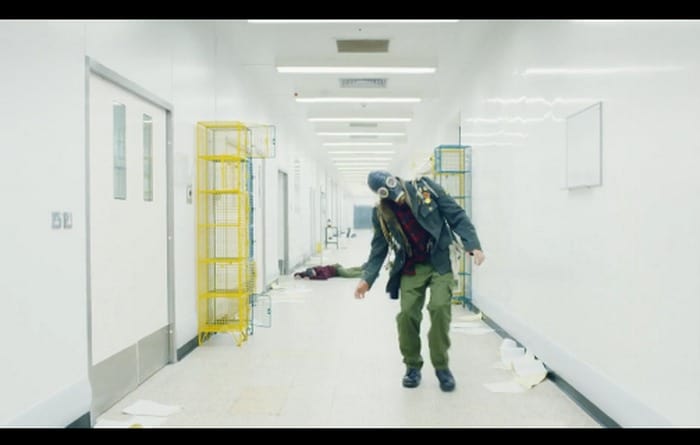 When Stanley Kubrick died, he left behind numerous film ideas that would never see the light of day. There was his epic Napoleon film; an adaptation of a Jim Thompson novel; his long-talked about Holocaust film Aryan Papers; and so much more.
But this was a new one to hear about: in 1996 Kubrick agreed to direct a music video for UNKLE’s upcoming Psyence Fiction album. You may recall, back when MTV played music videos, seeing Jonathan Glazer’s “Rabbit in Your Headlights” video, or Jake Scott’s “Be There,” both from UNKLE’s album. Alas, Kubrick’s video never got made. He had started filming Eyes Wide Shut and then passed away upon its release.

Now “The Corridor,” a glimpse of which you can see above, is an attempt to bring Kubrick and UNKLE back together. It’s not what actually might have been filmed by the director, but something that captures the project in spirit. It’s also a loving tribute to Kubrick’s career and his love of single-point perspective, which has been video essayed elsewhere.
Director Toby Dye, who has directed videos like “Paradise Circus” for Massive Attack and “Another Night Out” for UNKLE, took on the job of bringing “The Corridor” to the screen, co-designed by Ridley Scott Associates, working with Dye’s Black Dog Films.
“The Corridor” uses the one song off Psyence Fiction that never got a video, the Richard Ashcroft-sung “Lonely Souls,” as its backdrop. Dye has created four narratives that play on Kubrick’s iconic films–The Shining, A Clockwork Orange, Barry Lyndon,and 2001–but then interweaves time and character along a long corridor tracking shot, starring Joanna Lumley and Aiden Gillen.
In addition, “The Corridor” is a video centerpiece to what sounds like a very cool exhibition. Curated by Mo’Wax and UNKLE founder James Lavelle, “Daydreaming with Stanley Kubrick” opened yesterday at Somerset House in London and runs through August 24, 2016. Along with the video, the exhibition features artworks celebrating Kubrick’s influence on generations of artists. (The stack of heaters on top of the Overlook carpet is great.)
Said Dye:
‘For me, the unblinking red eye of 2001 A Space Odyssey’s HAL 9000 perfectly encapsulates the cinema of Stanley Kubrick. For all his films share that same coolly analytical gaze, studying from afar mankind and all its many foibles. Kubrick’s camera never appeared to follow the action, it was as if it moved of its own accord and the tableau of life simply unfurled before it. It was his seemingly never-ending camera zooms from Barry Lyndon that first sparked the seed of the idea behind “The Corridor,” before that idea grew, and grew into something that was, at times, infuriatingly ambitious, but I hope in the best tradition of the man who inspired it.’
Those who can’t attend will have to wait and see if and when the full video for “The Corridor” appears online. In the meantime, Somerset House awaits.

No Thoughts on Watch “The Corridor,” a Tribute to the Music Video Stanley Kubrick Planned to Make Near the End of His Life0 (0)