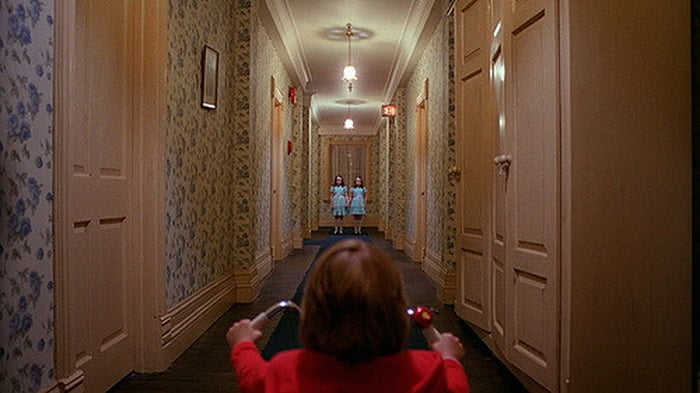 As a story, The Shining certainly passes the test of adaptability: we’ve featured not just the annotated copy of Stephen King’s original novel that Stanley Kubrick used to make his well-known film adaptation, but its Simpsons parody, its reimagined feel-good Hollywood trailer, its remake in miniature as a long-form Aesop Rock music video, and even a board game based on the book. Now The Shining has taken its latest form live on stage as a production of the Minnesota Opera, whose digital program you can read above.

“I can’t recall an opera in which the villain is a building,” writes Ron Hubbard in a review for the St. Paul Pioneer Press, “but that’s the case with The Shining, an adaptation of Stephen King’s novel about a haunted hotel and a family that winters within it. While ghosts play a prominent role in many operas, the spirits occupying the remote Rocky Mountain hotel in The Shining are servants to one powerful, malevolent master: the building itself.” Hubbard highlights the elaborate design that recreates the forbidding Overlook Hotel with a “stately set,” “swirling, spooky projections,” and building elements that “roll in and out behind screens swirling with patterns, creating an unsettling, kaleidoscopic effect.” 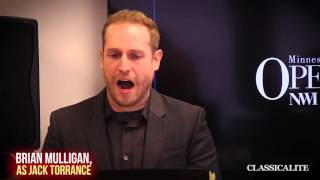 As every opera enthusiast soon finds out, no production can survive by design alone. But The Shining, according to Hubbard, earns full marks in other areas as well, including but not limited to its “score full of discomfiting themes that clash and collide to strongly sung and disarmingly believable portrayals of characters alive and otherwise.” He also emphasizes that the source material comes not from Kubrick’s film, but King’s novel: “Stanley Kubrick took great liberties with the story, going so far as to change how the conflict plays out and resolves. I actually found this operatic version considerably creepier, in large part because we get to know the ghosts better.”

“The novel and the movie are vastly different,” says librettist Mark Campbell in the video above, though they and they opera all tell “the story of Jack Torrance, who, because of economic reasons, accepts a job as the winter caretaker for a hotel in remote western Colorado.” And before long, as we know whether we’ve read the book or seen the movie, Jack “submits to a number of his demons” before the eyes of his terrified and increasingly endangered family. But it remains, Campbell says, “the story of a man who wants to do good — he just didn’t choose the right job, and ended up in a situation that did everything it could to tear him apart.”

The Shining the opera comes commissioned by Minnesota Opera’s New Works Initiative, “designed to invigorate the operatic art form with an infusion of contemporary works.” Given its completely sold-out success in St. Paul, where it premiered, we can safely say that this production has accomplished the mission of drawing vigor from a perhaps unexpected source, and even that it stands a chance of bringing its chilling artistry (not to mention its promisingly warned-about “strong language, gunshots, simulated nudity, theatrical haze, and strobe lighting”) to a city near you, preferably in the dead of winter to best suit the story — a time that, in Minnesota, already counts as forbidding enough.

O artigo: Stephen King’s The Shining Is Now an Opera, and The Tickets Are All Sold Out, foi publicado em: Open Culture

The post: Stephen King’s The Shining Is Now an Opera, and The Tickets Are All Sold Out, was published at: Open Culture