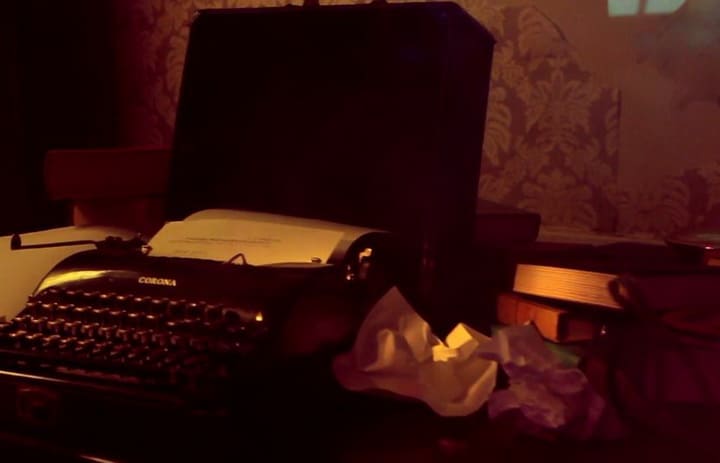 In 1909, early cinematic auteur D.W. Griffith offered his seven-minute interpretation of Edgar Allan Poe composing his acclaimed and widely-read poem “The Raven.” In 2011, filmmaker Don Thiel offered his twelve-minute interpretation of an encounter between a writer named Poe, apparently young and not long out of the military, and a stately talking raven — an encounter that takes place not in the modern day, nor in the first half of the nineteenth century during which the real Poe lived, but in the winter of 1959, over a century after Poe died — and in a Hollywood room, no less.

That might at first seem like an odd place for an adaptation of a poem of longing like “The Raven,” however deliberately skewed, to earn its honors. But you could see Lovecraft, who launched his own life’s career in elaborate explorations of dread beyond man’s direct comprehension almost exactly a century ago, as Poe’s literary heir.

But then, unlike Poe and “The Raven,” Lovecraft never claimed to have written anything deliberately and singlemindedly to maximize the satisfaction of the widest possible audience. Indeed, Lovecraft’s work, however influential on that of later imaginative writers, remains in the shadowy realm of the “cult,” while Poe’s has ascended onto the plane of required reading. Edgar Allan Poe’s the Raven, which envisions Poe’s most famous piece of work with booze, cigarettes, yellowing patterned wallpaper, lurid lighting, eight-millimeter film, a Corona typewriter, and other artifacts of midcentury dissolution, shows us that they’ve done so in part by transcending time and place. Longing, it seems, never gets old.