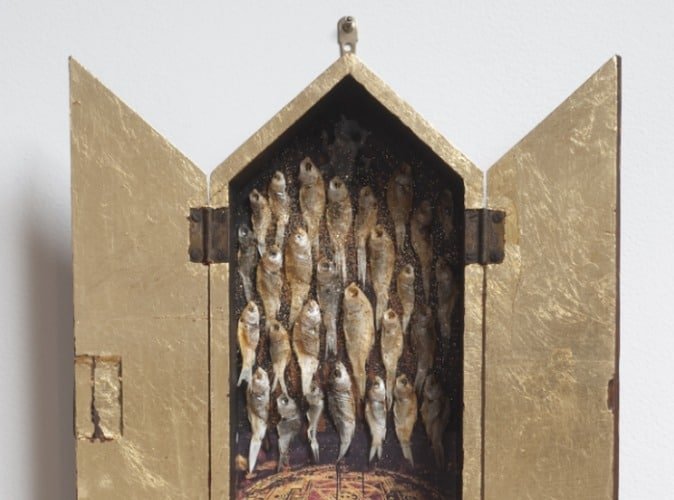 Praying at the Altar of Genesis Breyer P-Orridge – @Hyperallergic0 (0) The psychic cross — a cultic symbol adapted from the Eastern Orthodox Church — hangs above the Rubin Museum’s winding staircase, alerting you that something unusual is happening on the top floor of a museum devoted to Asian culture. Upon ascension, you may realize that you are no longer in the realm of Southeast Asian artefacts that the museum is known for. You’ve arrived elsewhere, somewhere between Eastern and Western rituality. You’ve come to praise a new kind of occult: the hybrid. You’ve come to pray at the altar of Genesis Breyer P-Orridge.

Try to Altar Everything is an exquisite, if sometimes gruesome, approach to spiritual transcendence and hybridity. Without prior knowledge of P-Orridge’s enthralling life journey (from avant-garde musician to a pioneer of body modification) the finer points of this exhibition may be lost on you. Beginning a career as a musician and performance artist in London’s gritty underground music scene in the 1970s, P-Orridge has performed with bands like Throbbing Gristle and Psychic TV. In 1993, P-Orridge met and married Lady Jaye. Upon moving to New York City, the pair took on the radically aspirational Pandrogeny Project: Applying Brion Gysin and William S. Burroughs’s technique of cutting up and rearranging text to body modification, P-Orridge and Lady Jaye underwent a series of elective surgeries to physically mirror each other, embodying the amalgamation of their two spirits into one. And although Lady Jaye passed away in 2007, P-Orridge now says that the Pandrogeny Project explores the combination of spirits across the earthly and heavenly planes, giving h/er special access to the unknown.

This is where Try to Altar Everything picks up. It is an exhibition that mixes the art historical with the deeply personal. But don’t come here expecting a mournful slog through P-Orridge’s life. Instead, this exhibition narrates h/er life’s journey into the occult. The iconography of this show is plentiful and pious. P-Orridge locates both the exotic and erotic drives in religious art and iconography, often with gruesome results. Works like “Blood Bunny” are pretty straightforward, but viciously staged by P-Orridge. Here we have a standing bunny carved from wood and encased in a glass jar. All that is good and well, and in the setting of the Rubin Museum one instantly thinks of the many Buddhist and Hindu devotional carvings downstairs. Upon closer inspection, you will undoubtedly notice the strand of bloody blonde hair trailing down the rabbit’s back. A label reveals the blood as coming from both Lady Jaye and P-Orridge while the hair is specifically from Lady Jaye’s head. Like a reliquary honoring a Christian saint, “Bloody Bunny” preserves what was lost, the physical presence of Lady Jaye, through whatever is left of her body.

As you may have noticed, references abound to the aesthetics of art across Christian, Buddhist, and Hindu traditions. But more specifically, P-Orridge seems to have a preoccupation for the derelict opulence of aging Byzantine art and the Freudian drive of Surrealism. The central piece of this exhibition, “Cruciform (Sigil Working),” is an homage to Salvador Dalí’s “Christ of Saint John of the Cross” but aesthetically devoted to a Byzantine pastiche represented by a royal red background and peeling gold foil, while a collage of Polaroids at the bottom references mosaic work. And like Byzantine art, “Cruciform (Sigil Working)” carries a lot of narrative in its iconography. The bottom collages contain images of genitalia, surgical bruising, leather, and kink. At the top, we see cut-outs of flowers (representational of P-Orridge’s childhood garden) and worms whose hermaphroditical anatomy represents the pandrogenous ideal. And in the middle, we have a translucent composite of Lady Jaye and P-Orridge posed in the image of Christ on the Cross, stuck between the pain and completion of their Pandrogeny Project. It’s hard to ignore the performative aspects of P-Orridge’s work. Magnified by the show’s temple-like exhibition design, the tiny altars and reliquaries along the walls will pull you in by their alarming ability to synthesize opulence, kitsch, and gore into an occult vessel for P-Orridge. At first glance, the small devotional altar called “Feeding the Fishes” is beautiful with its glittery gold finish. But closer inspection reveals its horrid contents: the scales of dead fish, a mold of decaying teeth. The lesson here, I think, is to not synonymize material beauty with piety and the grotesque with irreverence, but rather to treasure all things as equal. We must find the sacred in everything, beauty and ugliness alike. Genesis Breyer P-Orridge:Try to Altar Everything continues at the Rubin Museum of Art (150 W 17th St, Chelsea, Manhattan) through August 1.