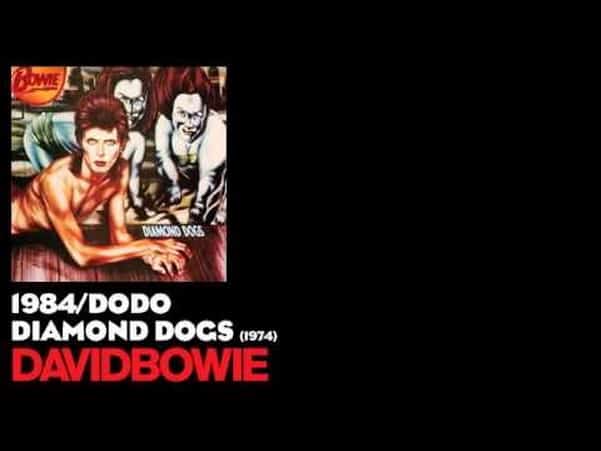 David Bowie’s 1974 album Diamond Dogs introduced a new hodgepodge of musical styles: “The music,” writes Nicholas Pegg, “was a four-way tussle between the receding sounds of glam, the rising influence of black soul, the synthesized nightmares of The Man Who Sold the World, and the ubiquitous rock’n’roll swagger of Jagger.” With its echoes of A Clockwork Orange and William S. Burroughs’ The Wild Boys, Bowie called the songs on the album part of a “glitter apocalypse” and described its conceptual scenario as “the breakdown of a city… a disaffected youth that no longer had home-unit situations, but lived as gangs on roofs and really had the city to themselves.” His “fragmented lyrics and the portrait of urban America’s sordid meltdown,” writes Pegg, “were clearly indebted to Burroughs.”
This was a mode in step with the late sixties/early 70s decadent ethos (and a concept anticipating later cult films like The Warriors and Escape from New York.) And yet, far from societal decay, one of Bowie’s original visions for the project was an adaptation of George Orwell’s novel of totalitarian social control, 1984. Diamond Dogs may work as a concept album in an oblique sort of way, but it came together, writes Bowie blog Pushing Ahead of the Dame, as “a salvage job, a compilation of scraps from stillborn Bowie projects.” In addition to the “urban meltdown” story, an aborted Ziggy Stardust musical produced two of Diamond Dogs’ songs, “Rebel Rebel” and “Rock’n’Roll With Me.” And Bowie’s foray into Orwell gave us “We Are the Dead,” “Big Brother,” and, of course, the Isaac Hayes-cribbing “1984.” (Hear the album version below and an earlier version at the top of the post, with a few more Orwellian lyrics and joined with an earlier song, “Dodo.”)

Perhaps his first public mention of the project came as “almost an aside,” notes Pegg, when he casually mentioned in a Rolling Stone interview with Burroughs, “I’m doing Orwell’s Nineteen Eighty-Four on television.” At first, the project had a much more ambitious scope. Chrisopher Sandford describes Bowie’s planned adaptation as “a West End musical, with an accompanying album and film, little of which ever happened.” Orwell’s widow and executor of his estate, Sonia Brownell considered the project in poor taste and refused him the rights to the novel. (Her death in 1980 allowed director Michael Radford to make his film version, and the Eurythmics to record their contested soundtrack album.)
What survives are the songs—as well as the visions of Orwell and Burroughs that continued to resonate in Bowie’s work. The mash-up of musical styles and political concepts in Diamond Dogs signals a kind of confusion of Bowie’s own politics—or those of his competing personae—which his later albums doggedly pursue.

On the one hand, Diamond Dogs sees Bowie hanging on to the role of alien dandy Ziggy Stardust. He had also embraced the avant-garde paranoia of Burroughs’ magical belief system and Orwell’s nightmare of institutional control and surveillance. Oddly pulling these tendencies together was the soul music that emerged fully-fledged on Young Americans. When it came to Orwell, “what fascinated Bowie,” writes Pushing Ahead of the Dame, “what was arguably the only thing that truly interested him in the mid-‘70s, was power, and the schizophrenic manner of thinking—double-thought, basically—that allows, even encourages its abuses.”

For a time, as Bowie moved into his Berlin phase, the fascination with power dominated his aesthetic, such that he got a little too carried away with his Thin White Duke character’s flirtations with fascism. (“By 1979,” writes Stereo Williams, “Bowie had dropped the Duke image and referred to it as ‘a nasty character for me.’”) But the theme of “double-thought,” the fascination with Orwellian dystopias, and the influence of Burroughs’ paranoia and cut-up technique survived the death of both the Thin White Duke and of Ziggy, the interstellar flâneur.
Twenty years after Diamond Dogs, strains of Orwell and Burroughs came together in Bowie’s dystopian epic Outside, whose lyrics, writes Sandford, “were subjected to a spin in his computer, industrializing the technique once limited to scissors and paste.” Orwellian themes crop up again in other later Bowie concept albums, and in a way, he continued to adapt the novel long after the literary experiments on Diamond Dogs, only in cut-up fashion rather than as glam musical theater.

The post: David Bowie Dreamed of Turning George Orwell’s 1984 Into a Musical: Hear the Songs That Survived the Abandoned Project, was published at: Open Culture