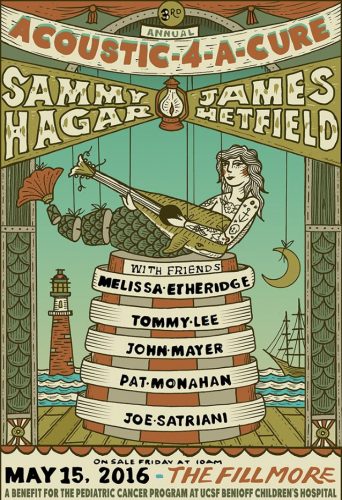 METALLICA‘s James Hetfield and legendary rocker Sammy Hagar today announced the lineup for their third annual “Acoustic-4-A-Cure” concert benefiting the Pediatric Cancer Program at UCSF Benioff Children’s Hospital. “Acoustic-4-A-Cure” returns to The Fillmore in San Francisco on Sunday, May 15 with another star-studded lineup (in alphabetical order):

Tickets will go on sale beginning April 1 at 10:00 a.m. via LiveNation.com. Tickets will not be available at The Fillmore box office, charge by phone or outlets. There is a two-ticket limit per customer.

Tickets are priced as follows: $135 each for general admission. A very limited amount of VIP will be available at $500 each. VIP tickets include: access to an exclusive VIP area to view the concert and mingle with the select artists, an Acoustic-4-A-Cure gift bag, complimentary food and drinks, and more. All proceeds from the concert will be donated to fund children’s brain tumor research at UCSF Benioff Children’s Hospital, one of the nation’s leading children’s medical facilities.

“Acoustic-4-A-Cure” was created by Bay Area rock legends Sammy Hagar and James Hetfield, whose vision was to raise needed funds and awareness for the Pediatric Cancer Program at UCSF by bringing together some of their legendary friends and throwing a must-see concert for fans. In past years, artists including Billie Joe Armstrong, Jerry Cantrell, Pat Monahan, Linda Perry, Chad Smith, Adam Sandler, Joe Satriani, Nancy Wilson, and more have joined Hagar and Hetfield to rock the sold-out benefit concerts.

Rolling Stone said Acoustic-4-A-Cure “delivered on its promise of once-in-a-lifetime musical moments, duets, jams and surprise guests” and The San Francisco Chronicle stated, “from the moment the doors opened at the venue… more than anything else it felt like a great big party among friends.”

Highlights from 2015 included a surprise appearance from Adam Sandler who performed “Ramble On” and “Dream On” alongside Monahan, Satriani and Smith; Cantrell, Smith and Hetfield joined together for METALLICA‘s power ballad “Mama Said”; Hetfield accompanied his daughter Cali, who wowed the audience with her performance of Adele‘s “Crazy For You”; and Satriani and Perry got the crowd rocking with “Communication Breakdown”. 2014 highlights included Hetfield‘s acoustic rendition of THE BEATLES‘ “In My Life”; Billie Joe Armstrong, Hetfield and Satriani bringing the house down with a medley of Bob Seger‘s “Turn The Page” and “Boulevard Of Broken Dreams”; and the Hagar promised “only-in-San Francisco moment” when Hetfield, Armstrong, Satriani, Monahan and Nancy Wilson joined him on stage for an all-star jam of Bob Dylan‘s “Rainy Day Women #12 & 35” to close the show. 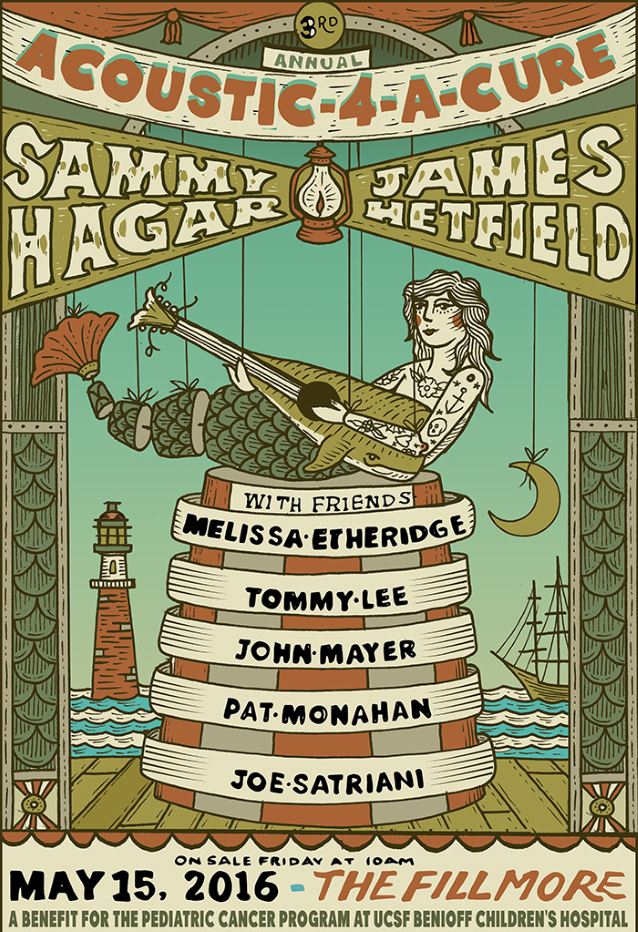 Witness The Talent Dr. Dre Saw In Anderson .Paak, As He Lights Up The Stage In A Full Concert (Video) – @AFH Ambrosia for Heads #drdre
0 (0)