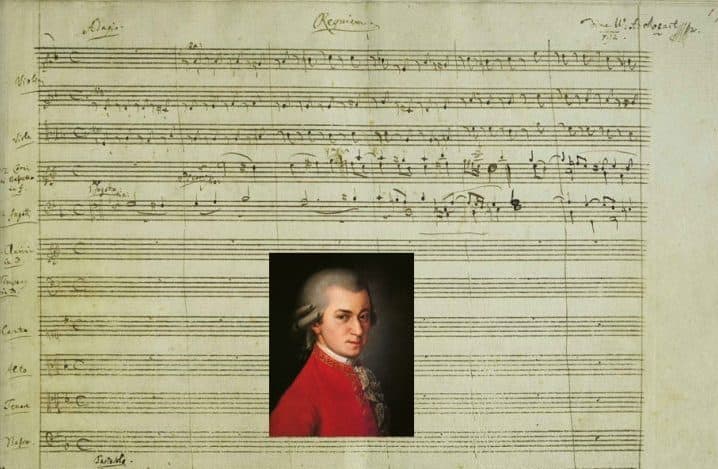 Following the immense success of Peter Shaffer’s play “Amadeus” (1979), and later the film (1984), Mozart’s Requiem began to be perceived by many in a new light. Shaffer surrounds the Requiem with a fictitious mystery that easily grips the imagination of the viewer but sadly does not bring a deeper, truthful understanding of the circumstances that gave Mozart reason to write the work. In this article, I will briefly explore the circumstances that gave rise to one of the most popular sacred choral works that the Classical Period of Music produced.

The Requiem was most likely written by Mozart for his own pleasure but certainly not for his own funeral, or with his funeral in mind. It is also thought that the person who mysteriously commissioned the Requiem was Count Franz von Walsegg-Stuppach. It is alleged that the Count was a nobleman who enjoyed claiming the work of other artists to be that of his own and that the commission was very probably to be used in this way with a view to impressing his wife. This is why Mozart was instructed not to make copies of the work or to openly discuss the commission with others.

At the time Mozart was asked to write the Requiem he was composing the opera, The Magic Flute and La Clemenza di Tito. Composing a single opera is a major undertaking and given that Mozart was already unwell, writing two operas and a Requiem Mass must have added to his weak condition. Much of Mozart’s final creative strength was devoted to the operas and the Requiem was never completed. The Introit was the only finished section of the Mass that Mozart left us. He had sketched out other sections of the work including the Kyrie, Sequence and Offertorium but it is reported that his widow Constanze, destroyed many unfinished works and sketches after Mozart’s death. She did, however, make arrangements for the Requiem to be completed even though this decision may have been forced on her at this time of great distress.

One of Mozart’s pupils Sussmayr is credited with having taken on the enormous task of completing the Requiem, although he is not the only individual to have do so. Others include Eybler, Stadler and later the musicologist Robert Levin. This leaves us with a dilemma as so little of the work was actually composed by Mozart, can we actually consider the work as one of his own? Listening to the music in the Sussmayr version is compelling, to the point that it is a challenge to hear where Mozart finishes and Sussmayr continues.

The nervous, passionate essence of the music clearly evident, with undertones of unrest and even gentle elation. An example that illustrates these qualities in the Requiem can be heard in the very opening Adagio, littered with suspensions, syncopations and disquiet.

The form of the Requiem as it is presently accepted is as follows: Introitus (Requiem aeternam – Kyrie); Sequenza (Dies Irae, Tuba mirum, Rex tremendae, Recordare, Confutatis); Offertorium (Dimine Jesu, Hostias, Abrahae); Sanctus; Benedictus, Agnus Dei; Communio (Lux aeterna, Cum sanctus). Essentially, only the first section (Introitus), was completely Mozart’s music, the remainder assembled by Sussmayr. It is muted that Mozart and Sussmayr had discussed the Sanctus, Benedictus and the Agnus dei and that Mozart had left vocal and bass lines, but this is only speculation. For the final two parts of the Communio, Sussmayr re-works Mozart’s material from the requiem aeternam and the fugue of the kyrie that brings a sense of appropriate completion to the Requiem.

What little survives in terms of orchestration points in a fascinating direction too. The Requiem score included trombones, basset horns and bassoons that bring a gravity and darkness to the music that is unsettling. Mozart requires no flutes or oboes in the score and the string writing frequently uses the lower registers of the instruments. Mozart gently alters orchestration to highlight the emotional context of the music and to create subtle colouristic changes that give the Requiem an operatic feel. The Tibra Mirum curiously includes a trombone solo, which is somewhat unusual in a work of this type.

What remains then is a work of extraordinary beauty and passion. The voice of a mature Mozart sounds through the Requiem together with the undeniable sense of tragedy and desperation. It presents us with a window into what might have been as well as a reflection back to the essence of Mozart as a composer.

There are, as you would expect, many very fine recordings of the requiem. Below, I list a few that are worthy of consideration and recommended by the BBC.