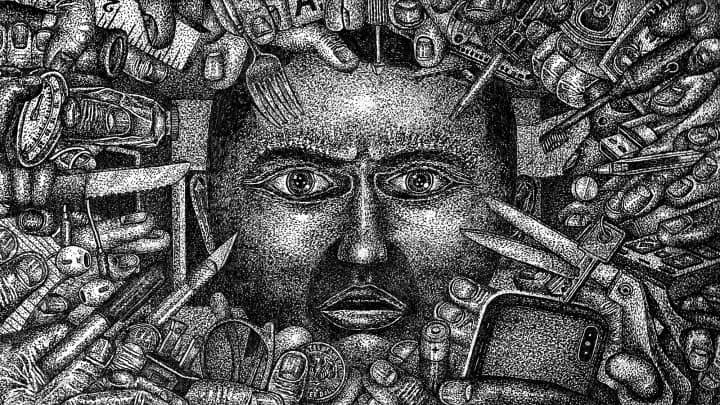 1,440 Portraits Emerge from a Single Ink Drawing in a New Animation by Jake Fried

In an impressive feat of dedication and patience, artist Jake Fried (previously) spent seven months creating Brain Wave, a hand-drawn animation using only ink and white-out. Fried reworked the same black-and-white drawing 1,440 times, scanning each new iteration into Photoshop and sequencing the drawings to play at 24 frames per second. He then added an original music track that frantically connects the hundreds of drawings into one 60-second video.

Centered both literally and narratively around a single, ever-changing face, the short animation takes the viewer through a wide range of emotions, settings, and themes. Because every frame is a new work of art, the piece as a whole feels like snapshots from a dream that have been remembered, recreated, and reassembled. Working without an outline or storyboard, Fried explained to Vimeo that each successive drawing dictated what would come next. “There is an inherent logic or rhythm that emerges as I make the work, I have developed an instinct or gut-feeling for when the next frame is ready to be scanned. I can get quite obsessive about the smallest shifts within a fraction of a second.”  The filmmakers’s work will be featured later this month at the Flat Earth Film Festival in Seyðisfjörður, Iceland from February 10-14, 2019 and in a group exhibition at Mills Gallery in Boston from February 23 through April 28, 2019. To see more of Fried’s work online, follow him on Instagram. (via Vimeo Staff Picks)