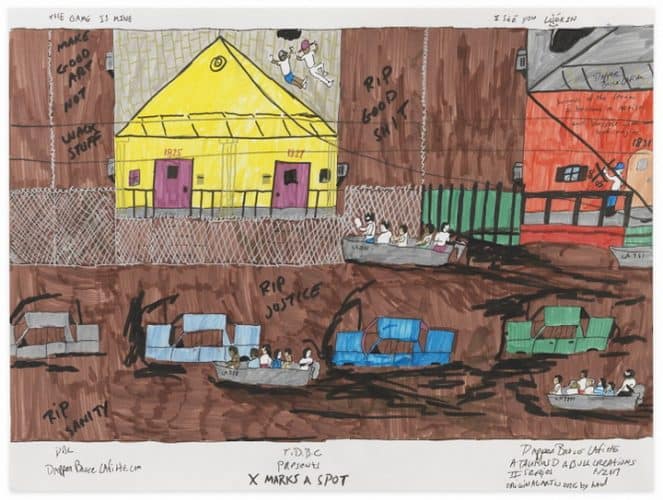 Even after 12 years, the specter of Hurricane Katrina still hovers over the American psyche. Especially in New Orleans, ghosts of the storm’s decimation now mingle vividly with the city’s older ones, reminding citizens who remain that what was once entrenched before Katrina can never really return. The spectacular failure of government and infrastructure in the wake of the disaster also spurred cultural erosion, uprooting many of New Orleans’ deeply held traditions and distinctive ways of life. For native New Orleanian Dapper Bruce Lafitte (who previously worked under the name Bruce Davenport, Jr.), chronicling the city as he once knew it lays at the heart of his practice. His new body of work in the show Kingpin of the Antpin documents the beginning of this seismic shift: the storm itself.

Lafitte was born to a 12-year-old mother and raised largely by his grandparents in the Lafitte Projects (which were demolished after Katrina by the U.S. Department of Housing and Urban Development, and from which his name derives) in New Orleans’ 6th Ward. Though he displayed natural artistic talent as a child, he abandoned drawing as he grew older, only returning to it in the aftermath of the storm, driven by a visceral, almost mystical impulse. Shortly after Katrina, Lafitte began making pencil drawings of marching bands from the city’s high schools, which he then colored, with fastidious precision, in marker. These scrupulous works on paper, which teem with hundreds of discrete characters rigorously lined up in marching formation along with their adoring crowds, are both a testament to the musical processionals that are so much a part of the fabric of New Orleans and love letters to the schools themselves. Lafitte donated some of the drawings to the schools that survived and used others to memorialize those that were lost to the city’s infamous post-storm educational restructuring. As recognition of his work grew, Lafitte also expanded his subject matter to encompass street scenes, Mardi Gras parades, boxing matches, and other scenarios where crowds gather.

Many of the works on view at Kingpin of the Antpin are also populated with scores of hand-drawn bodies, though this time Lafitte’s scenarios are neither celebratory nor social. The pieces deliver a one-two punch to the viewer, who is initially drawn in by their jaunty colors but then startled by the harrowing narratives they portray. Lafitte recounts his personal experiences during Katrina: watching the early mass exodus of people from the city, the military crowd control complete with M-16s, and his own escape and eventual evacuation to Cobb County, Georgia. Works like “I-10 Westbound” (2017) make evident the shambolic nature of the rescue operations that took place: Lafitte depicts a swarm of people exiting military helicopters and being lined up on the ground by machine-gun-wielding soldiers. A handwritten note scrawled on one side of the drawing declares that a helicopter deposited Lafitte and a friend on “the I-10 by the Causeway exit.”

The missive written directly onto the paper is no isolated incident: Text is part and parcel of Lafitte’s work. He has always incorporated shout-outs to friends, family, and celebrities both living and dead, as well as political commentary, and he continues that practice in these drawings, which are additionally peppered with a fragmented, explanatory account of his Katrina story. A viewer needs a thoughtful amount of time with each work to truly appreciate the dizzying amount of information, both written and visual, that’s being conveyed. In “No Love for the Poor” (2017), Lafitte’s figures stream into the street from both the Magnolia and Lafitte housing projects — stout, brick-lined squares that anchor the left side of the page. The artist has marked the roofs of each “RIP Magnolia” and “RIP Lafitte,” making the piece a tribute to these stalwarts of New Orleans housing that provided familiar community to thousands of low-income residents of the city for many decades but were demolished after the storm. When these, along with several other projects, were replaced with mixed-income housing, it was seen as an attempt to permanently drive poorer populations from New Orleans. The piece also contains shout-outs to several of Lafitte’s personal acquaintances who have perished, and it seems not insignificant that every individual in the mass is dressed all in white — a color that frequently symbolizes death and mourning.

In another work, Lafitte’s crowds stream toward a school bus–yellow building: the New Orleans’ Saints Superdome, which was a last-resort refuge for many residents during Katrina. In the text on the piece, Lafitte recounts some of the horrors that allegedly occurred in the overcrowded stadium. “As Katrina passed,” he writes, “the storm beat up the dome outside, but inside is where all hell went down.” The work is titled, plainly, “Do Not Go to the Superdome” (2017).

Taken together, the works in this show operate on an archival level, recording a singular personal trajectory in a grander, historically significant moment. This is in keeping with Lafitte’s entire 10-year career. Born of the storm, it’s a practice dedicated to the preservation of an endangered culture. In a 2011 interview with Mark Anthony Neal on the YouTube series Left of Black, Lafitte lamented the frequency with which he is referred to as a “folk artist.” The reasons this might be so — because he is self-trained, because of the meticulous nature of his work, because it is geographically centered outside of a central art capital — are distinctions that have always been arbitrary and are increasingly antiquated in our ever-more-interconnected world. At the same time, the force of globalization is one of the greatest homogenizers of a community’s unique qualities. “This is a culture,” Lafitte says of New Orleans. “When I retire from this art, I have to go back to my culture.”

Thank you for having my art