A rare photo of a young Nick Blinko of Rudimentary Peni

The release of the Sex Pistols’ angrily anthemic “Anarchy in the U.K.” was responsible for more than just the much-needed attitude adjustment of rock music in the mid-1970’s. All across Great Britain thereafter, young punk bands began to take the anarchist mantra for more than just its shock value. Anarchy became a personal creed, with ideals espoused in the lyrics, performances, imagery and most importantly lifestyle of the new anarcho-punk movement (animal rights and veganism didn’t come from nowhere, folks). Among these anarcho-originators were legendary groups like Crass, Flux of Pink Indians, Subhumans, Poison Girls, Omega Tribe, Zounds, Chumbawumba, and my personal favorite, Rudimentary Peni.

Rudimentary Peni was formed in Abbots Langley, Hertfordshire by lead singer/guitarist Nick Blinko (credited as “mouth-guitar-pen” with “pen” referring to his role as the illustrator of their record covers), bassist Grant Matthews, and drummer Jon Greville. Matthews came up with the name (“When I was at school studying biology, we were told that in the fetal stage the clitoris is a rudimentary penis.”) Considered dangerously demented by some, Rudimentary Peni’s music was fast-paced, loud, angry, and essayed lyrical themes of anti-establishment and anti-church sentiments along with the dark, macabre trappings of a proto form of deathrock (as heard on their full-length debut Death Church and 1988’s brutal Cacophony which was written about the life and work of H.P. Lovecraft).

Since 1980, Rudimentary Peni has maintained a deliberate shroud of mystery, having toured only briefly and given few interviews. There are very few existing photos of the group. Instead, album covers and imagery were emblazoned with Blinko’s twisted pen-and-ink artwork that has since outlived itself as more than just a band asset.

Previously diagnosed with schizoaffective disorder, Blinko’s artwork offers insight into an aberrant, paralyzing world of mental health and disorder. Similar to the dismal work of the band he fronted, these pieces are dark, disjointed, and unearthly depictions of death, destruction, and emptiness. As a result, Blinko’s uniquely bleak talent is celebrated within the outsider art community and his work is part of the Collection de l’art brut in Lausanne, Switzerland. He has published three books—The Primal Screamer in 1995, The Haunted Head in 2009, and Visions of Pope Adrian 37th in 2011. (Blinko was apparently convinced that he was the actual pontiff during one of his forced stays in a psychiatric hospital in the mid-90s.)

In the case of British artist Nick Blinko (b.1961), who has in the past been hospitalised, the need to make pictures is stronger than the desire for the psychic ‘stability’ brought by therapeutic drugs which adversely affects his ability to work. His images are constructed of microscopically detailed elements, sometimes consisting of literally hundreds of interconnecting figures and faces, which he draws without the aid of magnifying lenses and which contain an iconography that places him in the company of the likes of Bosch, Bruegel and the late Goya. These pictures produced in periods when he was not taking medication bring no respite from the psychic torment and delusions from which he suffers. In order to make art, Blinko risks total psychological exposure.

That explains just how far out he’s willing to go for the sake of his work. True dedication, both impressive and sad. As his representative, London-based art dealer Henry Boxer said of Blinko:

“He compromises his sanity to produce his art.” 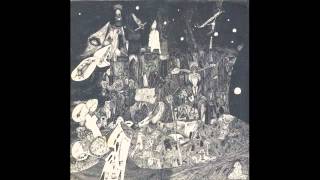 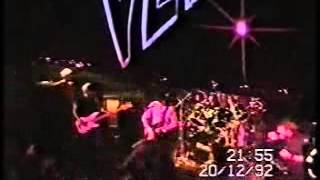 Rudimentary Peni’s only recorded performance. Videotaped on December 20th, 1992 at The Venue in London.

Watch Coda, a Prize-Winning, Thought-Provoking Animation About a Lost Soul’s Encounter with Death0 (0)

Edward Gorey Illustrates H.G. Wells’ The War of the Worlds in His Inimitable Gothic Style (1960)0 (0)

No Thoughts on At the Mountains of Madness: Enter the chaotic worlds of Rudimentary Peni’s Nick Blinko0 (0)