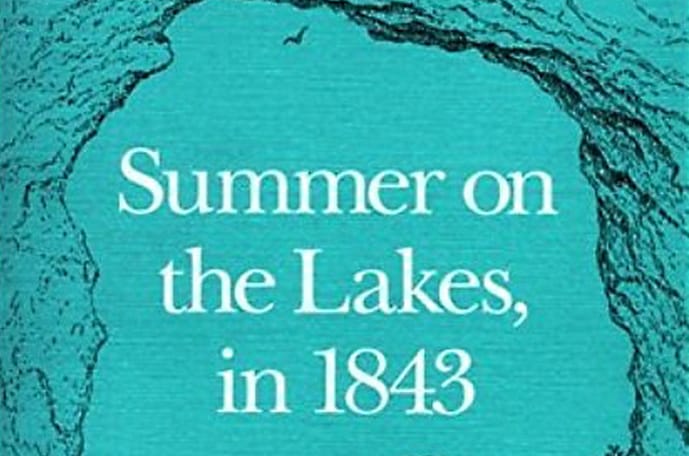 “The mind is not … a highway, but a temple, and its doors should not be carelessly left open.”

Two years before Transcendentalist grand dame Margaret Fuller (May 23, 1810–July 19, 1850) inspired the women’s suffrage movement and laid the foundation for modern feminism with her 1845 masterwork Woman in the Nineteenth Century, she published something very different in subject, though not in sensibility and spirit: Summer on the Lakes (public library | free ebook) — the record of her experiences and observations traveling westward from her native New England, among which are the most stunning literary portrait of Niagara Falls I’ve encountered and a sorrowful account of the fate of the displaced Native American tribes, with whom Fuller sympathized and spent time.

Upon returning home, Fuller persuaded the Harvard library to grant her research access to its book collection, the largest in the nation. No woman had been previously admitted for more than a tour.

When she completed the book, her first, she published it under the ungendered initials S.M. Fuller, fearing that her sex would compromise the book’s reception — a common practice among women writers of nonfiction that would stretch well into the twentieth century. (Almost a hundred years later, marine biologist and writer Rachel Carson published her own stunning debut as R.L. Carson a quarter century before she catalyzed the modern environmental movement under her full name.)

With its unusual combination of crisp journalistic observation and lyrical philosophical reflection, Fuller’s first book was an instant success, selling better and faster than the debut of her intimate friend and fellow Transcendentalist monarch Ralph Waldo Emerson.

In one of the most profound passages in the book, Fuller examines the tension between physical reality and metaphysical thought by staging an allegorical dialogue between four perspectives she terms Old Church, Good Sense, Self-Poise, and — the one with which she herself identifies most closely — Free Hope.

Good Sense, modeled on Emerson, issues to Free Hope a blanket admonition against all mystical meanderings:

All around us lies what we neither understand nor use. Our capacities, our instincts for this our present sphere are but half developed. Let us confine ourselves to that till the lesson be learned; let us be completely natural, before we trouble ourselves with the supernatural.

But Free Hope responds by pointing out that transcendence is not a matter of mysticism but of attentiveness to the reality of life. That selfsame year, across the Atlantic, the Danish philosopher Søren Kierkegaard was issuing a parallel admonition against the inability to pause and pay attention, which he indicted as our greatest source of unhappiness.

A century and a half before Annie Dillard’s case for the miraculous in the mundane and six decades before Hermann Hesse’s clarion call for learning to savor life’s everyday joys, Fuller writes:

We need only look on the miracle of every day, to sate ourselves with thought and admiration every day. But how are our faculties sharpened to do it? Precisely by apprehending the infinite results of every day.

Who sees the meaning of the flower uprooted in the ploughed field? The ploughman who does not look beyond its boundaries and does not raise his eyes from the ground? No — but the poet who sees that field in its relations with the universe, and looks oftener to the sky than on the ground. Only the dreamer shall understand realities, though, in truth, his dreaming must not be out of proportion to his waking!

Fuller calls this wresting of meaning from plain reality, of transcendent insight from mere fact, “poetic observation.” Its true practitioners, she argues, are not those lured by fanciful excursions into metaphysical delusion but those who practice critical thinking coupled with a receptivity to wonder — or what Carl Sagan would extol, a century and a half later, as the vital balance of skepticism and openness. She writes of these poetic observers:

[They] work in the true temper, patient and accurate in trial, not rushing to conclusions, feeling there is a mystery, not eager to call it by name, till they can know it as a reality: such may learn, such may teach.

The mind is not, I know, a highway, but a temple, and its doors should not be carelessly left open.

Complement this fragment of Fuller’s wholly delectable Summer on the Lakes with nineteen-year-old Sylvia Plath on finding transcendence in nature and Diane Ackerman’s secular prayer, then revisit Fuller’s paragon of constructive criticism to the young Thoreau.

Frida Kahlo on the Meanings of the Colors0 (0)

No Thoughts on Good Sense vs. Free Hope: Margaret Fuller on Reaping Wonder from Everyday Reality0 (0)