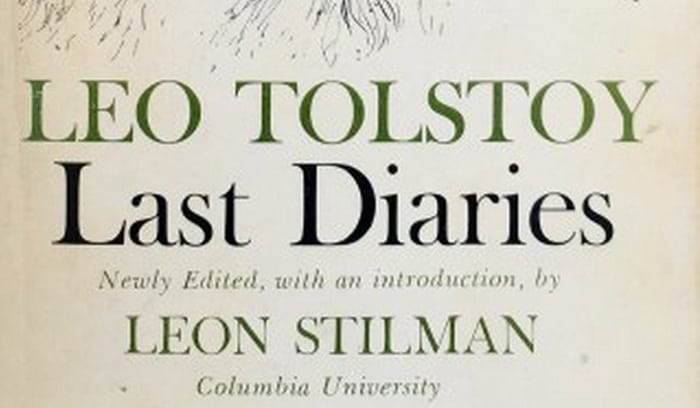 The Demands of Reason and Love: Leo Tolstoy on Human Nature – @brainpickings
0 (0)

Some of humanity’s most celebrated writers have championed the benefits of keeping a diary, but none have reaped those more ravenously than Leo Tolstoy (September 9, 1828–November 10, 1910). In his youth, the journal was a record of his moral and spiritual development; on its pages, he worked himself out and found his purpose. In his old age, the diary became Tolstoy’s most direct medium of reflection on the meaning of existence, gleaned from a long, imperfect, yet vibrantly lived life.

The final year of these reflections was translated into English by Leon Stilman and posthumously published as Last Diaries (public library) — a trove of wisdom from one of the most psychologically insightful and largehearted writers our civilization has produced.

In an entry from June 30 of 1910, penned more than thirty years after his memoir of the search for meaning and less than five months before his death, he examines the redemptive requirement of living. Long before Holocaust surivor Viktor Frankl’s memorable assertion that “everything can be taken from a man but one thing: the last of the human freedoms — to choose one’s attitude in any given set of circumstances,” Tolstoy writes:

There is no evil. Life is a blessing. If it is not, then know that you are at fault. And you have been given time to correct your error, to have the joy (the highest blessing) of correcting your fault. That is the only reason for time. If you do not correct your fault, it will be corrected against your will — by death. Yes, life is a blessing. There is no evil. There are only our faults, faults in general and our personal ones, and we have been given the joy through time of correcting them. And there is the greatest joy in correcting them.

Three decades earlier, his compatriot and contemporary Fyodor Dostoyevsky had articulated a similar sentiment in his own diary, where he reflected on why there are no bad people. Like him, Tolstoy considers our faults and harmful behaviors rooted not in an inherently bad nature but in bad habits of heart and mind. Our redemption, he argues, lies in rewiring those habits and reorienting them toward goodness:

In another entry penned the following day, half a century before Martin Luther King, Jr. made his memorable case for love as the guiding force of human life, Tolstoy continues along the same line of meditation:

Our life is a quest for gratification. There is physical gratification in health, in satisfying the lusts of the body, in wealth, sexual love, fame, honor, power. All these gratifications 1) are outside our control, 2) may be taken away from us at any moment by death, and 3) are not accessible to everyone. But there is another kind of gratification, the spiritual, the love for others, which 1) is always in our control, 2) is not taken from us by death, and we can die loving, and 3) not only is accessible to all, but the more people live for it, the more joy there will be.

With an eye to the thing in us in direst need of stewardship, he adds:

Last Diaries is, lamentably, out of print but is well worth the used-book hunt. Complement it with Tolstoy on finding meaning in a meaningless world, what separates good art from the bad, his forgotten correspondence with Gandhi about violence, human nature, and why we hurt each other, his reading list of essential books for every stage of life, and this rare recording of him reading from his Calendar of Wisdom shortly before his death, then revisit the brilliant and underappreciated Henry Beston on human nature.

The post: The Demands of Reason and Love: Leo Tolstoy on Human Nature, was published at: brainpickings

No Thoughts on The Demands of Reason and Love: Leo Tolstoy on Human Nature – @brainpickings
0 (0)