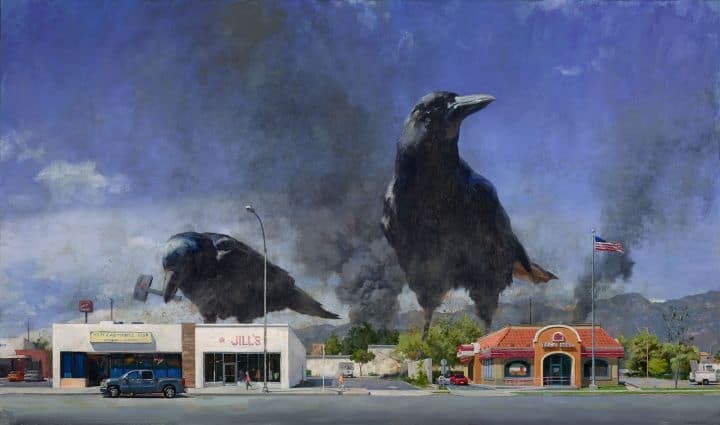 The paintings of John Brosio feel incredibly cinematic, as if each is a still from a contemporary horror film paused at a striking moment of tension. Brosio paints enlarged birds, crabs, and Big Gulp containers poised against the American suburban sprawl. The animals and objects hover over fast food chains and car repair shops, looking as if they might strike what lies below at any moment, or simply continue their crusade in an alternate direction. A humor creeps into the paintings when we remember the actual issues our contemporary society and climate face—if presented with the option would we rather choose invasion by iguana? “The success of a painting in the end has so little to do with subject matter but compels us rather with how well it codifies the way in which things relate to one another in this universe,” he explains in his bio. “I think of painting as the pursuit of realizing some degree of surrender to these sensibilities through an orchestration of select relationships.”

His works have been considered “anxious realism” and seem to point to an particularly poignant American unease. You can see more of Brosio’s tension-filled and dangerous landscapes on his website and Instagram. (via Faithwaites) When Andy Warhol Realized That Everything He Did Was The Art