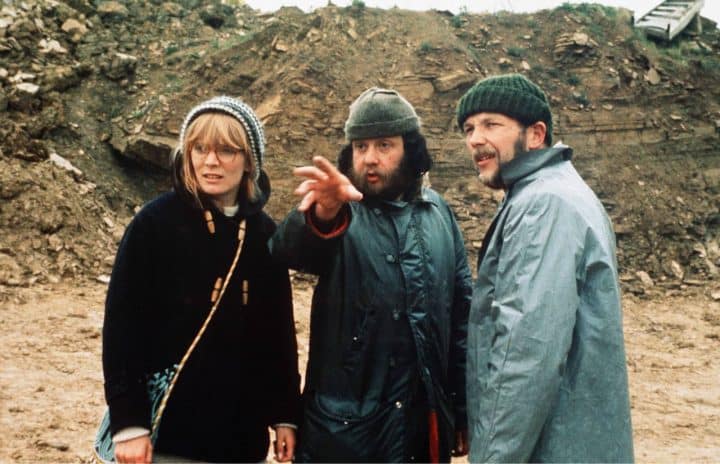 Mike Leigh, Alison Steadman, Roger Sloman on the set on Nuts in May, 1976

In 1975, the BBC hired Mike Leigh to create a series of Five-Minute Films. Leigh, a master of kitchen sink naturalism,  explained his garrulous bursts of plot and character:

“I thought it was a cracking idea, and I would have done forty of them or fifty – so you’d see them all the time, and sometimes you might see a character you never saw again, sometimes you might see somebody popping up for a moment and then be a main character in another one, or there’d be a couple of ones that would run on to a narrative. It would be a whole microcosm of the world. There was debate about whether they should be shown at the same time or they should be dotted around the channel, like currants in the pudding, as Tony Garnett, the producer, called it.”

It wasn’t to be. Only five films were made: Afternoon; A Light Snack; Probation; Old Chums; The Birth of the Goalie of the 2001 F.A. Cup Final.

The BBC didn’t broadcast Five-Minute Films until 1982, by which time Leigh was an established name, having scored a number of hits on the BBC’s Play For Today. If you’re not familiar with Leigh’s early work, do check out the sublime Abigail’s Party (1977) – watched by 16 million people when it aired on British TV (note to the BBC: kill off the moribund EastEnders soap opera and invest in broadcasting that doesn’t treat viewers as mentally negligible, slack-jawed berks and bigots in need of moral schooling) –  and Nuts in May (1976), both of which Leigh wrote and directed.

The Five Minute Films are below.