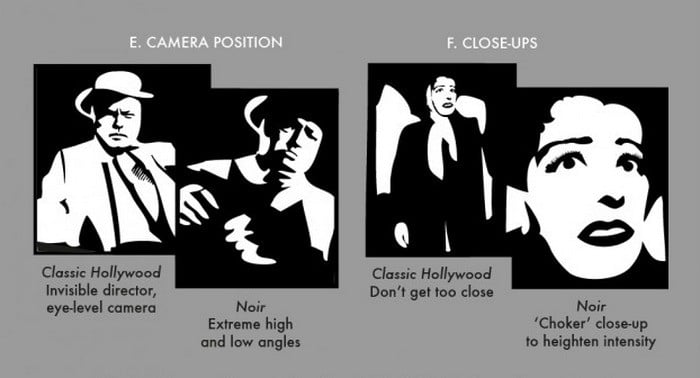 What makes film noir film noir? Like Supreme Court justice Potter Stewart making his famous pronouncement on obscenity, we can honestly claim to know it when we see it. But what elements, exactly, do we only see converge in the high, undisputed levels of the film noir canon? Designer Melanie Patrick and writer Adam Frost have, at the behest of the British Film Institute, come up with a handy infographic (click here to view it in a larger format) that explains and visualizes the particulars of the “shadowy world of one of classic Hollywood’s most beloved subgenres.”

First, film noir needs the right cast of characters, including an investigator with “relative integrity” like Sam Spade or Philip Marlowe, a criminal (“usually a murderer”), one “bad, beautiful” woman, and another “good, bland” woman. These characters should come from a script based on a piece of American pulp fiction such as The Maltese Falcon or Double Indemnity, ideally adapted by a European émigré director like Fritz Lang or Billy Wilder and replete with heavy drinking and smoking, “stolen money or valuables,” and obsessions with the past, all wrapped up in a bleak, convoluted story that plays out in an urban setting by night.

The heyday of film noir lasted from the early 1940s to the late 1950s, right in the middle of the tyranny of the Motion Picture Production Code, better known as the Hays Code, which, in limiting “the amount of sex and violence that could be shown on screen,” forced filmmakers to get creative and convey dramatic tension primarily with lighting and composition. It also meant that the finest film noir made maximally effective use of its dialogue, producing such immortally snappy exchanges as the one in Murder My Sweet when Philip Marlowe shoots back to a woman who announces she finds men very attractive, “I imagine they meet you halfway.” The infographic above also highlights the importance of a stylish poster and a startling tagline, ultimately arriving at the name of the sole film that possesses every element of film noir — and hence “the noiriest film ever.”

All this comes as the fruit of research into “around 100 of the most highly regarded film noirs,” and the infographic’s creators have made some of their data available to view on a Google spreadsheet. Should you now feel like conducting a film-noir investigation of your own, we can offer you a few leads, including the five essential rules of film noir, Roger Ebert’s ten essential characteristics of film noir, “noirchaeologist” Eddie Muller’s list of 25 noir films that will stand the test of time, acollection of film noir’s 100 greatest posters, and of course, our collection of 60 film noir movies free to watch online. But stay alert; if we’ve learned one thing from watching film noir, it’s that investigations, no matter the relative integrity with which you conduct them, don’t always go as planned.

Thanks to Melanie for letting us feature her work!

The post: The Essential Elements of Film Noir Explained in One Grand Infographic, was published at: Open Culture