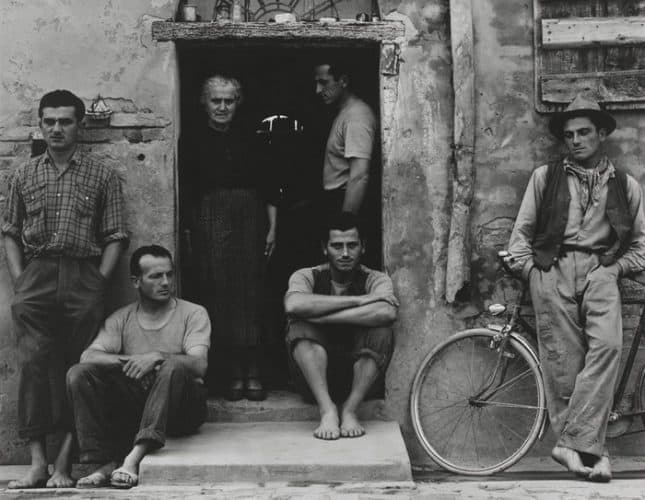 LONDON — It’s always surprising when important artists get overlooked. That’s the case with Paul Strand in the UK, whose contribution to the history of photography might still slip away from the British public’s view. While Strand’s photographs were collected by the Victoria & Albert Museum (V&A) during his lifetime, there hasn’t been an exhibition in the country for nearly 40 years. Paul Strand: Photography and Film for the 20th Centuryat the V&A amends this.

As early as the 1910s, when most photographers were making photos that looked like Impressionist paintings, Paul Strand was making hard-edged pictures that felt more appropriate for the modern age. The first room of the exhibition gathers Strand’s early pictures, which are also some of his most famous, from “Wall Street, New York” (1915) to “Blind Woman, New York” (1916).

At this time, Paris was the capital of the cultural world and the slowly shaping-up American art scene was perceived as provincial; painters were still massively influenced by European trends. In New York City, however, new energies were at play. Developments in industry and a fast-growing economy were turning the city into the symbol of modernity it was destined to become. By now, Alfred Stieglitz was considered a prominent photographer and a feverish figure in the cultural life of the city. Camera Work, the photographic journal he founded and directed from 1903 to 1917, periodically showed the achievements of a generation of photographers who would make the history of American photography. Stieglitz’s gallery, 291, introduced New York to the latest works of European modernists — from Rodin’s sexually explicit drawings to Constantin Brâncuși’s sculptures, to art by Picasso and Matisse — years before the Armory show officially brought modern art to the country.

Over this crucial span of years, Strand got closer and closer to Stieglitz, receiving advice and developing a friendship in spite of the nearly 30-year age gap between the two. By 1917, having pioneered an abstract and documentary approach to photography, Strand had achieved such remarkable results that Stieglitz devoted the whole final issue ofCamera Work to his friend’s work. In the same issue, Strand enunciates his work ethic in a text that sounds programmatic:

The photographer’s problem therefore, is to see clearly the limitations and at the same time the potential qualities of his medium, for it is precisely here that honesty no less than intensity of vision, is the prerequisite of a living expression. This means a real respect for the thing in front of him, expressed in terms of chiaroscuro (color and photography having nothing in common) through a range of almost infinite tonal values which lie beyond the skill of human hand.

Few photographers have been so influential in the shaping of a country’s cultural identity than Strand. His “Wall Street, New York” (1915) prefigures years of American painting, from Edward Hopper to Rothko’s color field canvases. In a similar way, the typical local architecture in “White Fence, Port Kent, New York” (1916) feels authentically American. With little more than an urban architectural detail, Strand composed an image that influenced generations to come, including David Lynch in his first scene of Blue Velvet.

The exhibition stresses the quintessentially American quality of Strand’s work, screening his short documentary Manhatta (voluntarily misspelled the way immigrants would pronounced it), which he co-directed with painter Charles Sheeler in 1921. Intrinsically photographic and almost completely abstract at times — the camera movement is kept to a minimum — Manhatta is an ode to the city of New York.

From the 1920s, Strand started to travel extensively, documenting his journeys and road trips through pictures. In Mexico, where he worked for the government documenting the condition of workers, he shot some powerful abstract images while also producing films, including “Redes” (The Wave) in 1936. The movie tells the story of fishermen striking for better wages in Veracruz, and is shot in a visual language that would later be identified with Italian Neorealism’s. Featuring nonprofessional actors, “Redes”‘s main scene showing fishermen at work forewarns the better-known fishing scene in Stromboli, Land of God, directed by Roberto Rossellini 14 years later.

A committed socialist, Strand fled McCarthyism at the end of 1940s, leaving the US for France, where he would focus on a type of photography that combined social documentary with his aesthetic, formal concerns. The V&A exhibition emphasizes this international output, including Strand’s collaborations with writers from around the world that were published in photo books — one of which resulted in one of his most celebrated images. In 1953, at the invitation of Neo-Realist screenwriter Cezare Zavattini, Strand visited the modest village of Luzzara, built on agriculture and the production of Parmesan cheese, in Italy’s Po river valley. The stories of the people trying to survive the post-war period were then collected in Un Paese, the photo book featuring the iconic photograph “The Family, Luzzara” (1953).

Strand’s desire to depict a shared humanity is particularly palpable in these works. Although the portraits of poor people were made during a particular time and in a specific place, the photographs of Un paese (meaning, in Italian, both “a village” and “a country”) came to represent the hopes and difficulties of the nation as a whole.

To Strand, portraiture was the most complete and difficult way to present a subject to the public. Always frontal, his portraits are astonishingly sincere. The subjects look at us while we look at them and assume the original position of the photographer when he took the picture. Nothing happens by chance in a photograph by Strand. Even the least important details, like the wood grain of some boards in the background, tell something about the character of the subject. John Berger once wrote that Strand “tries to find a city in a street, the way of life of a nation in the corner of a kitchen.” The environment of a person is not only part of that person, but is the person, the same way a portrait taken by Strand is never only a mere image of someone, but rather a condensation of the experiences that made that particular person.

Look at the portrait of Mrs. Archie MacDonald, taken during a trip to the Hebrides islands in Scotland. In the picture, the ordered rhythm of the polka dots of Mrs. MacDonald’s blouse is reiterated by the hairnet that she wears so naturally. In turn, the lock of shiny white hair coming out of the hairnet sends the gaze back to her immaculate collar, telling a great deal about the woman’s composure and grace.

Strand travelled to the Hebrides in 1954 with the intention of documenting the threat to traditional Gaelic life during the Cold War. Inspired by a BBC radio program on Gaelic song, and news that the island would become home to a testing range for the US’ new nuclear missile, the photographer raced to capture the sights, and fishing and agricultural life, of pre-industrial times. Ahead of the retrospective, the V&A acquired nine rare vintage prints from this series, originally made for the photo book Tir A’Mhurain (Land of Bent Grass), here presented for the first time to the British public.

Very well articulated and installed, Paul Strand: Photography and Film for the 20th Century manages to fill an important gap in the photographer’s exhibition history in the UK, showing masterpieces next to lesser known works. Moving through the show, the empathetic quality of Strand’s photographs, especially his portraits, becomes prominent: pictures are sufficiently spaced out so that visitors can spend time in front of them, engaging with the subjects as though they were acquaintances, or friends. It’s good way to discover, or rediscover, the photographer’s work.

Assassin’s Creed International Trailer Dials Back The Kanye West, Is So Much Better – @Cinemablend