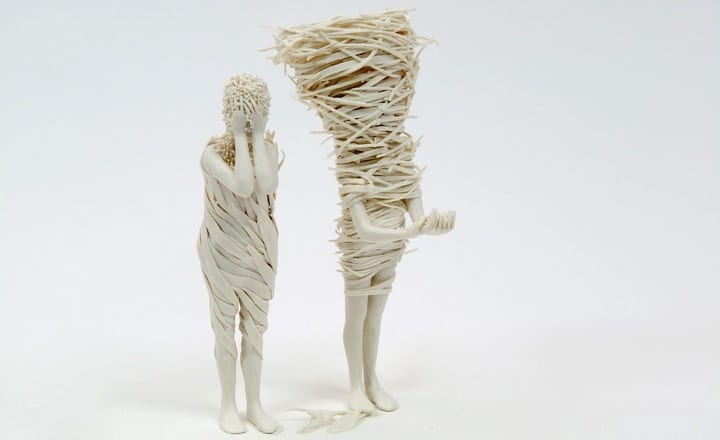 Since 2013, artist Claudia Fontes (previously) has been investigating the use and meaning of the word “foreigner” in a series of small figurative sculptures. Each sculpture, which is about the size of Fontes’ hand (about 23 x 5 cm / 9 x 2 inches) is made with flaxseed paper porcelain. Anonymous figures, alone or in groups, are consumed by or emerging from organic textures that resemble grass, sea sponges, and thin shards of stone. Fontes has been based in England for the last ten years, where ‘foreigner’ is a popular pejorative term. She was born and raised in Argentina, and has also lived and worked in the Netherlands. The artist describes the process and inspiration behind the series on her website:

I began to make [Foreigners] in response to the English landscape that surrounds me and to my cultural understanding of it as a foreigner. I generally find the images out of which they are born during walks in the nearby forest and in the field that begins as soon as I cross the street where I live. During these walks, I concentrate in observing the process of transformation, interaction and the mechanisms of adaptation that happen amongst the creatures that share this particular bio-political system.

You can explore more of Fontes’ body of work, which includes other sculptures as well as conceptual pieces, on her website. (via Womens Art)