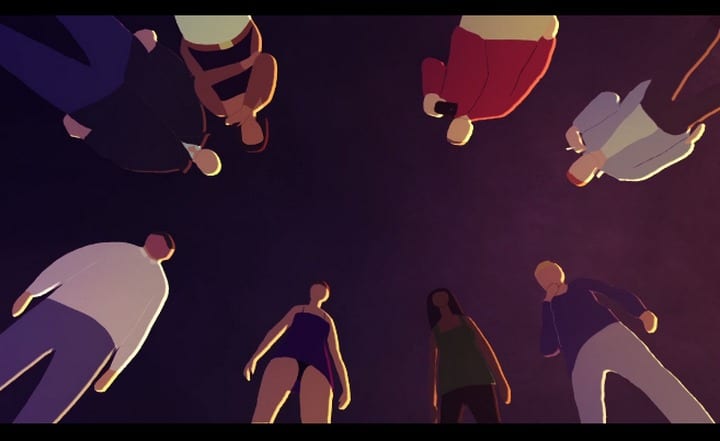 Watch Coda, a Prize-Winning, Thought-Provoking Animation About a Lost Soul’s Encounter with Death0 (0)

Alan Holly’s short animated film, Coda, was shortlisted for the 2015 Academy Awards and nominated for an Annie Award, on its way to winning 18 awards at film festivals across the world (including Best Animated Short Film at South by Southwest). As you probably know, a coda is typically the passage that brings a song/musical piece to a close. In the case of Holly’s film, it refers to the end of life, a soul’s attempt to bargain with Death before eventually accepting his fate.

According to Filmbase, the nine-minute, hand-animated film is “the culmination of two years of painstaking work by a small team of dedicated animation artists” in Ireland. And it’s voiced “by Brian Gleeson (Standby, The Stag, Love/Hate) and Orla Fitzgerald (The Wind that Shakes the Barley).”

Aesthetically, writes Short of the Week, the “film combines many elements in a unique way—the flat shapes and refined color palettes (seen also in work by Matthias Hoegg) with the painterly, organic movement of greats like Miyazaki. In fact, one could almost view the film as a modern day Miyazaki film with it’s piano score, surreal elements, and powerful characters.”

A History of Alternative Music Brilliantly Mapped Out on a Transistor Radio Circuit Board: 300 Punk, Alt & Indie Artists0 (0)

No Thoughts on Watch Coda, a Prize-Winning, Thought-Provoking Animation About a Lost Soul’s Encounter with Death0 (0)