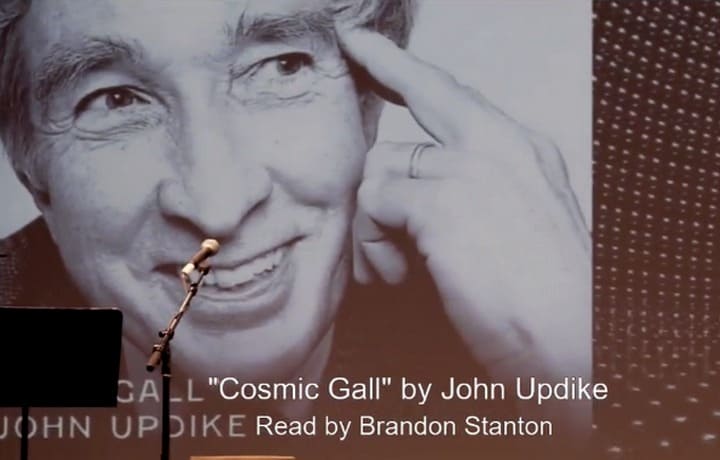 A celebration of the imperceptible that governs the universe on the most fundamental level.

“Each day, we wake slightly altered, and the person we were yesterday is dead,” John Updike (March 18, 1932–January 27, 2009) wrote. “So why, one could say, be afraid of death, when death comes all the time?” There is a loveliness to this perspective, almost the opposite of nihilism in its untroubled acceptance of existence on its own terms — an acceptance that can’t be unrelated to Updike’s lifelong love of science and his fascination with the laws that govern the universe.

Although best known as a novelist and short story writer, Updike was a lifelong poet and belongs to the small cabal of poets in whose body of work science occupies a significant portion. In 1985, he published Facing Nature (public library) — an entire collection of his poems celebrating science, among which is a short, charming ode to one of the most bewitching discoveries in physics.

In 1930, fifteen years before Wolfgang Pauli received the Nobel Prize in Physics on Einstein’s nomination and nearly two decades before he co-invented synchronicity with Carl Jung, the Austrian-Swiss physicist envisioned a solution to a great enigma: When a neutron transforms into a proton and an electron in a reaction, some of its energy and angular momentum — or spin — seemed to mysteriously disappear. Pauli proposed a new kind of particle, which was soon christened neutrino — a tiny, massless catchall for the missing energy and momentum. It took twenty-six years for experimentalists to detect the particle Pauli had theorized. (This may seem like a long time, but it is dwarfed by the heroic century-long quest to detect the gravitational waves Einstein theorized, which resulted in the most significant astrophysical discovery since Galileo first pointed his crude telescope at the sky.)

Three decades after the detection of this ghostly particle, which defies every human intuition and yet is part and parcel of the most fundamental nature of reality, Updike eulogized the neutrino in a poem titled “Cosmic Gall,” which the largehearted and endlessly funny Humans of New York creator Brandon Stanton read at the inaugural 2017 edition of The Universe in Verse, taking the stage after poet Elizabeth Alexander’s magnificent performance. Please enjoy:

Every second, hundreds of billions of these neutrinos pass through each square inch of our bodies, coming from above during the day and from below at night, when the sun is shining on the other side of the earth!

— From “An Explanatory Statement on Elementary Particle Physics,” by M.A. Ruderman and A.H. Rosenfeld, in American Scientist

Neutrinos they are very small.
They have no charge and have no mass
And do not interact at all.
The earth is just a silly ball
To them, through which they simply pass,
Like dustmaids down a drafty hall
Or photons through a sheet of glass.
They snub the most exquisite gas,
Ignore the most substantial wall,
Cold-shoulder steel and sounding brass,
Insult the stallion in his stall,
And, scorning barriers of class,
Infiltrate you and me! Like tall
And painless guillotines, they fall
Down through our heads into the grass.
At night, they enter at Nepal
And pierce the lover and his lass
From underneath the bed — you call
It wonderful; I call it crass.

The Universe in Verse — a celebration of science through poetry, which I am hosting in collaboration with astrophysicist Janna Levin and The Academy of American Poets — returns in April of 2018. For more highlights from the 2017 edition, savor Amanda Palmer’s reading of Neil Gaiman’s feminist poem about science, Janna Levin’s reading of Adrienne Rich’s tribute to women in astronomy, Tracy K. Smith’s ode to the Hubble Space Telescope, Rosanne Cash’s reading of Adrienne Rich’s homage to Marie Curie, Diane Ackerman’s poem about our search for extraterrestrial life, playwright Sarah Jones’s chorus-of-humanity tribute to Jane Goodall, and my reading of Polish Nobel laureate Wisława Szymborska’s ode to the number pi, then watch the complete show for a two-hour poetic serenade to science.

Survivors of Concert Violence Speak Out