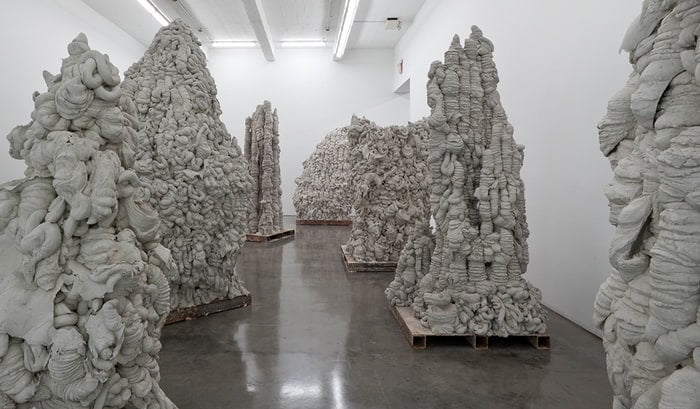 MEXICO CITY.- The University Museum of Contemporary Art of the National Autonomous University of Mexico (Universidad Nacional Autónoma de México, UNAM), presents, from 28 May until 27 November, for the first time in Mexico and Latin America, Anish Kapoor. Archaeology: Biology. A unique exhibition comprising sculptures made from 1980 to 2016, the exhibition occupies half of the museum space and will include new works shown for the first time, for example, a series of silicone paintings and a large earth and resin work.

Anish Kapoor, Observations on his Creative Process
Anish Kapoor states that when the process guides the artist, the work is a discovery. “I don’t have anything to say, but I know that if I allow myself to investigate and delve into the process, it brings me to meanings I could never have imagined”.

For the curator, Catherine Lampert, this idea is reinforced by the fact that in the exhibition at the MUAC, the work takes on a dimension of its own that involves the viewer, inviting each person to experience the plenitude and freedom of form, and the potential space created by the work. As Kapoor states: “It is a proposition about space treated as a poetic idea”.

Archaeology: Biology, Conceptual Structure
Although the exhibition is not chronological, it offers a wide-ranging perspective on Kapoor’s work, in which the curatorial proposal centers on the experience of the spectator. The exhibition is articulated around four thematic points: the first, Auto-Generated Forms, begins with work made in the medium that established Kapoor’s reputation towards the end of the seventies: pigment. The colored powder was significant because it lacked concrete materiality. Often mysterious objects with uncertain boundaries. Other works turn upon the interaction of form with light: perfect prisms and mirrors that extend and distort space

The second theme, Many Kinds of Beauty, a strangely harmonious post-industrial world, brings into tension the ideals of purity and the mathematical precision of form – the swelling of When I am Pregnant (1992) and the seamless mirror surface of C-Curve (2007) – with the grotesque and the scatological cement extrusions of Ga Gu Ma (2011-2012).

Time is the third thematic section, where we encounter the cupola At the Edge of the World (1998), that floats some 2.4 meters above head height. The deep space approaches the condition of a void and a representation of infinity bringing the scale of the space, the work and the spectator into play.

In Unpredictable Forces, the final gallery, we encounter the work My Red Homeland, (2003), a circular landscape of churning wax in perpetual motion. Juxtaposed with this sculpture are works containing deep cavities and dark interiors like the wound in the wall: Archaeology and Biology (2007), Void (1989), Mother, Mother (2016), 3 Days… (2016), Tongue Memory (2016), and the colossal earth and resin work Place Under (2015). Regarding this last sculpture, Lampert adds, “the earth and resin creature might appear ugly, but in the abject lies some fundamental poetic condition.” Quoting Kapoor: “The artist isn’t concerned with what a given work looks like, with its aesthetics; the more profound question is whether or not it is real.”

The post: University Museum of Contemporary Art presents Anish Kapoor’s work for the first time in Mexico, was published at: artdaily.org