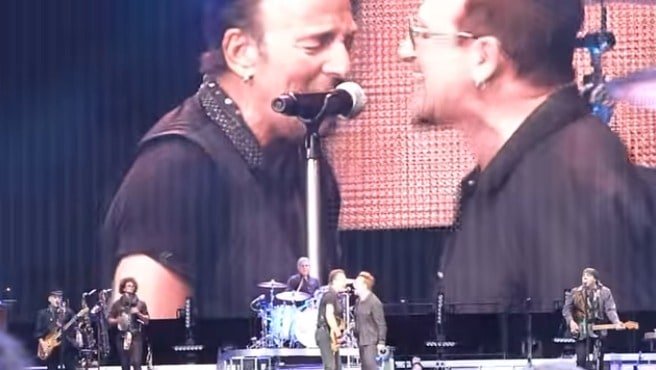 Bruce Springsteen and the E Street Band’s The River Tour headed to Dublin, Ireland this weekend, and at the second of two shows at the city’s Croke Park Sunday, the group was joined by U2’s Bono, who performed the Patti Smith classic “Because the Night” alongside Springsteen and company.

This wasn’t the first time Bono teamed with the E Street rocker on the Springsteen-co-written track: In 2003, Bono and Springsteen performed the track at an E Street show in Miami.

Six years later, Bono, Springsteen and Smith joined up to play the song together at the Rock and Roll Hall of Fame 25th anniversary shows at New York’s Madison Square Garden; it was also Bono who inducted Springsteen into the Rock Hall in 1999.

More recently, Springsteen surprised fans at U2’s August 2015 gig at Madison Square Garden by joining the band onstage for “I Still Haven’t Found What I’m Looking For” and Ben E. King’s “Stand By Me.” Eight months earlier, Springsteen helped fill in for an injured Bono at U2 Minus One’s World AIDS Day concert in Times Square.

The post: Watch Bruce Springsteen, Bono Perform ‘Because the Night’ in Dublin, was published at: Rolling Stone