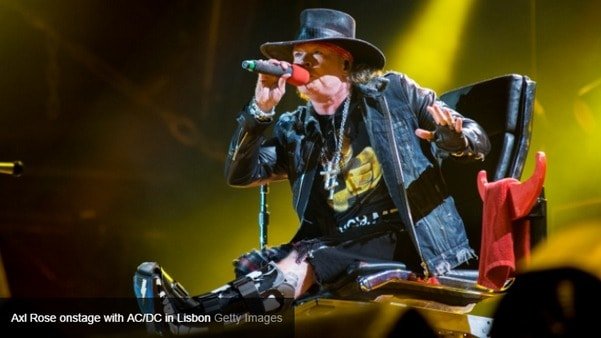 AC/DC must be starting to think someone up there doesn’t like them. A catalogue of misfortune has beset this most enduring of hard-rock bands during the past two years. First, founding guitarist Malcolm Young stepped down from the band due to dementia. Then drummer Phil Rudd left in a haze of criminal charges. Most recently, singer Brian Johnson had to quit touring or face total hearing loss, while the band faced a backlash from fans unhappy at the manner of his departure and/or his superstar replacement: Axl Rose, singer of the newly reunited Guns N’ Roses, and a man who recently faced some adversity of his own in the form of a fractured foot.

Rose just doesn’t seem very AC/DC somehow. Like Johnson, the singer keeps a hat jammed to his head at all times, but there the similarities were expected to end.

Yet Rose actually seemed happy to play a different role here. From his opening greeting of “Nice to meet you!” – just five minutes later than billed – he was a deferential and pleasant presence between songs and an energized, brooding one during them. He remained seated throughout the main set, his leg still encased in a brace, but even his perch was more low-key than during the recent Guns N’ Roses shows: It resembled a humble office chair that had been jazzed up at the last minute with a few lumps of metal and some devil horns.

But while Rose’s body might be ailing, his voice remained in great shape. From the opening salvo of “Rock or Bust,” “Shoot to Thrill” and “Hell Ain’t a Bad Place to Be,” it was clear that, musically at least, the GN’R man is a great fit for AC/DC.

True, he missed a couple of cues and on more recent material seemed unsure of whether to stick to his own trademark wail or give it more Johnson-esque rasp. But in the company of guitarists Angus and Stevie Young, bassist Cliff Williams and drummer Chris Slade – sounding as tight as any lineup on the planet – Rose still seemed to be reaping the rewards of what he has joked were his first-ever proper rehearsals.

Rose seemed particularly at home on Bon Scott-era classics such as “Dirty Deeds Done Dirt Cheap” and “High Voltage” and happy to defer to Angus Young’s all-action, duckwalking showmanship. Once Rose is mobile again – and that can’t be far off, as he walked on and off the stage between encores – that dynamic may change, but for now, Young handled the heavy lifting, leaving Rose free to enjoy himself. 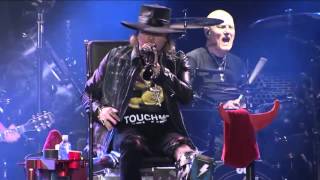 And enjoy himself he did, self-deprecatingly introducing “Shot Down in Flames” as “a song they wrote about my life story”; leading the chants of “Angus! Angus!”; changing the lyrics of “You Shook Me All Night Long” to “Knocking me out with those Portuguese thighs”; and gawping at the band’s enduring, if unimaginative props (a huge bell for “Hells Bells,” an even bigger inflatable woman for “Whole Lotta Rosie”).

After a spectacular closing version of “Let There Be Rock,” featuring Angus writhing around on a hydraulic platform as confetti bombs were blown around by the ever-stronger gusts from the waterfront, Rose returned to say goodbye to resounding cheers from the faithful.

And if the main set hadn’t already won over the crowd, the final volley of “Highway to Hell,” the rarely heard “Riff Raff” (a GN’R live staple, performed with Angus himself at Coachella, though Saturday was the first time AC/DC had played it live since ’96) and a cannon-and-pyro strewn “For Those About to Rock (We Salute You)” certainly did.

So, in the end, this monster mash-up of classic rock megabrands avoided becoming the Batman v Superman of hard rock (i.e., loud, flashy but ultimately empty); instead, the Lisbon performance hinted at the new union’s potential to be one of the touring hits of the summer – assuming Rose stays under control and AC/DC avoid any further mishaps.

Of course, it’s hard to see the collaboration lasting longer than the summer, and AC/DC without Johnson will always remain unthinkable to some. But while frontmen change, AC/DC’s core values remain resolutely, unassailably the same. And as Saturday’s show proved, there was nothing a seated Axl Rose – or a little inclement weather – could do to change that. 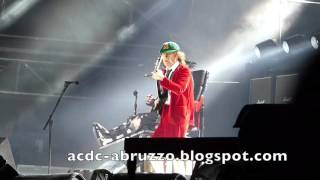 Set List:
“Rock or Bust”
“Shoot to Thrill”
“Hell Ain’t a Bad Place to Be”
“Back in Black”
“Got Some Rock & Roll Thunder”
“Dirty Deeds Done Dirt Cheap”
“Rock ‘n’ Roll Damnation”
“Thunderstruck”
“High Voltage”
“Rock ‘n’ Roll Train”
“Hells Bells”
“Given the Dog a Bone”
“Sin City”
“You Shook Me All Night Long”
“Shot Down in Flames”
“Have a Drink on Me”
“T.N.T.”
“Whole Lotta Rosie”
“Let There Be Rock”

Encore:
“Highway to Hell”
“Riff Raff”
“For Those About to Rock (We Salute You)”

The post: Axl Rose Triumphs at AC/DC Debut in Lisbon, was published at: Rolling Stone