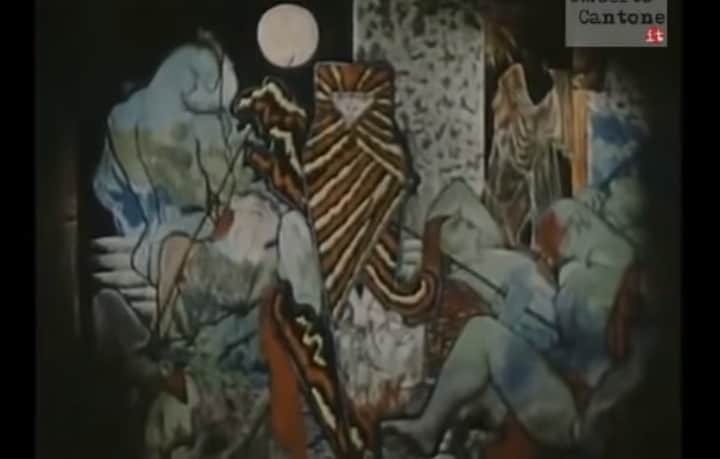 “Villa Santo-Sospir belongs to Madame Alec Weisweiller,” says the narrator. “It dominates Cape Santo Sospir, the last point on the map before arriving on Cape Ferrat. The villa is situated on the road to the lighthouse and its rocks descend to the sea.” So far this could be any of the myriad popular television houses about big, expensive houses in exotic places. Then it turns personal: “It looks out on Antibes, Cannes, Nice, and to the right, Villefranche, where I have lived for a long time.” The narrator is avant-garde writer, artist, and filmmaker Jean Cocteau; the house is one he and other artists spent twelve years “tattooing.”

Weisweiller, writes Vogue‘s Stephen Todd, was “a Parisian socialite and patron of Yves Saint Laurent,” and the cousin of Nicole Stéphane, Elisabeth in Cocteau’s Les Enfants Terribles. “It was Stéphane who introduced the two during filming. It was un coup de foudre, the pair of eccentrics hitting it off right away.” Invited in 1949 to stay at Weisweiller’s Riviera house for a week, Cocteau soon found himself, as he put it, “tired of idleness,” and asked Weisweiller’s permission to paint the head of the Greek god Apollo above the living-room fireplace. ”

So delighted were the new pals with the result that they decided Cocteau should carry on,” writes Todd, quoting Cocteau: “I was imprudent enough to decorate one wall and Matisse said to me, ‘If you decorate one wall of a room, you have to do them all.’”

Matisse contributed to the decoration of the house, as did Picasso and Chagall. You can see it in La villa Santo Sospir, the 40-minute film he made about the project in 1952, with more recent images available at Atlas Obscura. Most of the house’s imagery comes from Greek mythology, even the entryway mosaics, one of which depicts the head of Orpheus. Eight years later, Cocteau would return to both Orpheus and Villa Santo-Sospir to shoot his final film Testament of Orpheus. “We have tried to overcome the spirit of destruction that dominates the time; we decorated the surfaces that men dreamed to demolish,” says Cocteau in the earlier film. “Perhaps, the love of our work will protect them against bombs.” And even if Villa Santo-Sospir should fall, cinema has preserved it for all time.