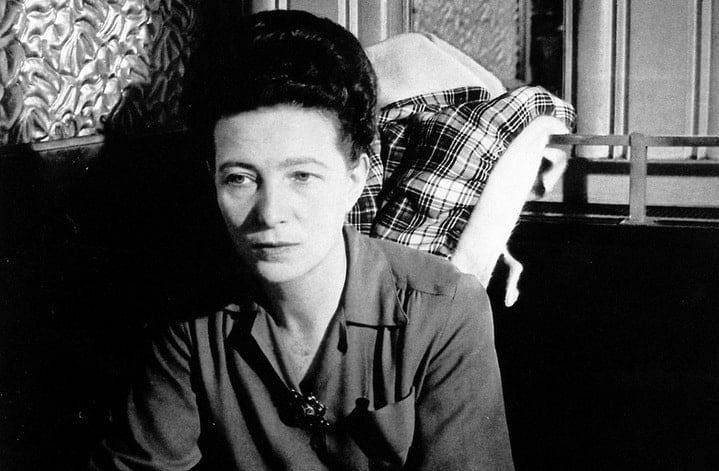 “The artist … must first will freedom within himself and universally; he must try to conquer it.”

“We made the world we’re living in and we have to make it over,” James Baldwin wrote in considering freedom and how we imprison ourselves. “We will not be free if we do not imagine freedom,” Ursula K. Le Guin asserted half a century later in her case for storytelling as a force of liberation. “We cannot demand that anyone try to attain justice and freedom who has not had a chance to imagine them as attainable.”

Our individual part in that world-remaking collective imagination is what the great French existentialist philosopher and trailblazing feminist Simone de Beauvoir (January 9, 1908–April 14, 1986) examines in a portion of The Ethics of Ambiguity (public library) — the paradigm-shifting 1947 treatise that gave us Beauvoir on freedom, busyness, and why happiness is our moral obligation and vitality and the measure of intelligence.

Every man has to do with other men. The world in which he engages himself is a human world in which each object is penetrated with human meanings. It is a speaking world from which solicitations and appeals rise up. This means that, through this world, each individual can give his freedom a concrete content. He must disclose the world with the purpose of further disclosure and by the same movement try to free men, by means of whom the world takes on meaning.

But this liberation, Beauvoir argues, is bedeviled by a central paradox of our temporal bias: Instead of fully inhabiting our present, we are too often tempted to regard it as posterity’s past and observe it with the same “tranquil curiosity” of a tourist with which we observe yesteryear’s events and torments. She writes:

Such an attitude appears in moments of discouragement and confusion; in fact, it is a position of withdrawal, a way of fleeing the truth of the present… But the present is not a potential past; it is the moment of choice and action; we can not avoid living it through a project; and there is no project which is purely contemplative since one always projects himself toward something, toward the future; to put oneself “outside” is still a way of living the inescapable fact that one is inside.

The present and the past, she notes, require of us not only different perceptual attitudes but different practical actions:

We must not confuse the present with the past. With regard to the past, no further action is possible. There have been war, plague, scandal, and treason, and there is no way of our preventing their having taken place; the executioner became an executioner and the victim underwent his fate as a victim without us; all that we can do is to reveal it, to integrate it into the human heritage, to raise it to the dignity of the aesthetic existence which bears within itself its finality; but first this history had to occur: it occurred as scandal, revolt, crime, or sacrifice, and we were able to try to save it only because it first offered us a form. Today must also exist before being confirmed in its existence: its destination in such a way that everything about it already seemed justified and that there was no more of it to reject, then there would also be nothing to say about it, for no form would take shape in it; it is revealed only through rejection, desire, hate and love.

Artists and writers, Beauvoir argues, experience this challenge of upholding the responsibility of the present most acutely, and it is they who must labor most fervently to liberate the present from the past:

In order for the artist to have a world to express he must first be situated in this world, oppressed or oppressing, resigned or rebellious, a man among men. But at the heart of his existence he finds the exigency which is common to all men; he must first will freedom within himself and universally; he must try to conquer it: in the light of this project situations are graded and reasons for acting are made manifest.