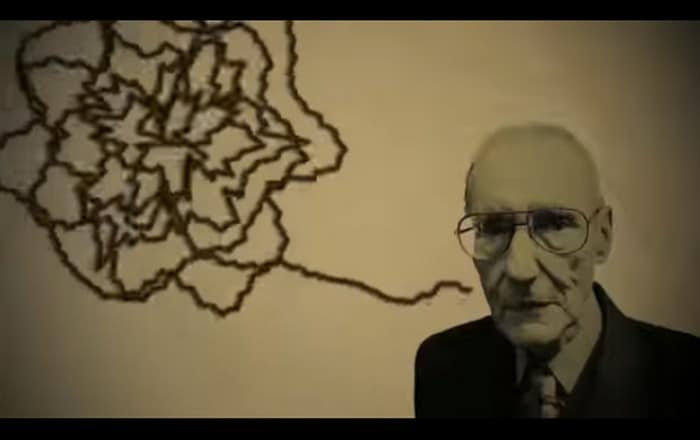 The inner critic creates writer’s block and stifles adventurous writing, hems it in with safe clichés and overthinking. Every writer has to find his or her own way to get free of that sourpuss rationalist who insists on strangling each thought with logical analysis and fitting each idea into an oppressive predetermined scheme or ideology. William S. Burroughs, one of the most adventurous writers to emerge from the mid-20th century, famously employed what he called the cut-up method. 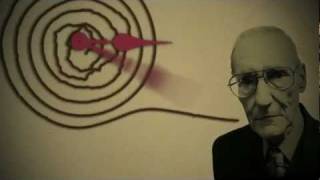 Developed by Burroughs and painter Brion Gysin, this literary take on the collage technique used by avant-garde artists like Georges Braque originated with Surrealist Tristan Tzara, who “proposed to create a poem on the spot by pulling words out of a hat.” The suggestion was so provocative, Burroughs claims in his essay “The Cut-Up Method,” that cut-ups were thereafter “grounded… on the Freudian couch.” Since Burroughs and Gysin’s literary redeployment of the method in 1959, it has proved useful not only for poets and novelists, but for songwriters like David Bowie and Kurt Cobain. And any frustrated novelist, poet, or songwriter may use it to shake off the habitual thought patterns that cage creativity or choke it off entirely. How so?

Well, it’s best at this point to defer to the authority, Burroughs himself, who explains the cut-up technique thus:

The method is simple. Here is one way to do it. Take a page. Like this page. Now cut down the middle and cross the middle. You have four sections: 1 2 3 4 … one two three four. Now rearrange the sections placing section four with section one and section two with section three. And you have a new page. Sometimes it says much the same thing. Sometimes something quite different–(cutting up political speeches is an interesting exercise)–in any case you will find that it says something and something quite definite. Take any poet or writer you fancy. Heresay, or poems you have read over many times. The words have lost meaning and life through years of repetition. Now take the poem and type out selected passages. Fill a page with excerpts. Now cut the page. You have a new poem. As many poems as you like.

Burroughs gives us “one way” to do it. There may be infinite others, and it’s up to you to find what works. I myself have pushed through a creative funk by making montages from scraps of ancient poetry and phrases of modern pop, clichés ripped from the headlines and esoteric quotes from obscure religious texts—pieced together more or less at random, then edited to fit the form of a song, poem, or whatever. Virtual cut-and-paste makes scissors unnecessary, but the physical act may precipitate epiphanies. “Images shift sense under the scissors,” Burroughs writes; then he hints at a synesthesia experience: “smell images to sound sight to sound sound to kinesthetic.”

Who is this method for? Everyone, Burroughs asserts. “Cuts ups are for everyone,” just as Tzara remarked that “poetry is for everyone.” No need to have established some experimental art world bona fides, or even call oneself an artist at all; the method is “experimental in the sense of being something to do.” In the short video at the top, you can hear Burroughs explain the technique further, adding his occult spin on things by noting that many cut-ups “seem to refer to future events.” On that account, we may suspend belief.

As Jennie Skerl notes in her essay on Burroughs, cut-up theory “parallels avant-garde literary theory” like Jacques Derrida’s Deconstruction. “All writing is in fact cut ups,” writes Burroughs, meaning not that all writing is pieced together with scissors and glue, but that it’s all “a collage of words read heard overheard.” This theory should liberate us from onerous notions of originality and authenticity, tied to ideas of the author as a sui generis, all-knowing god and the text as an expression of cosmically ordered meaning. (Another surrealist writing method, the game of Exquisite Corpse, makes the point literal.) All that metaphysical baggage weighs us down. Everything’s been done—both well and badly—before, Burroughs writes. Follow his methods and his insistent creative maxim and you cannot make a mistake—“Assume that the worst has happened,” he writes, “and act accordingly.”

No Thoughts on How to Jumpstart Your Creative Process with William S. Burroughs’ Cut-Up Technique – @Open Culture0 (0)