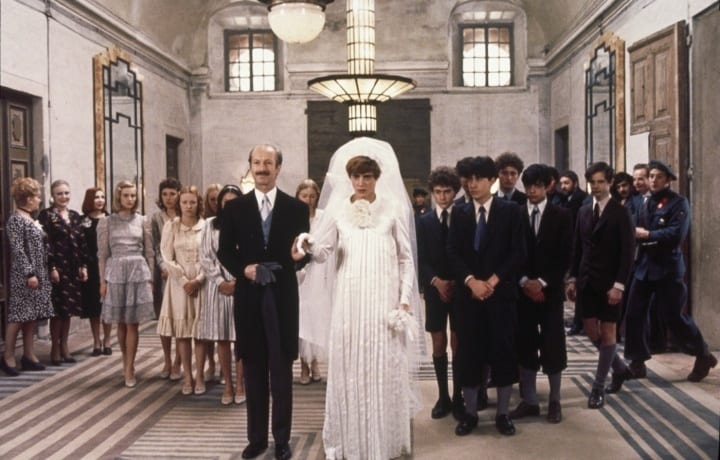 Pasolini’s Felt Duty to be Scandalous
0 (0)

“I believe to give scandal is a duty, to be scandalized is a pleasure, and to refuse to be scandalized is moralism,” the poet and filmmaker Pier Paolo Pasolini said in an October 1975 French television interview. These remarks were made in reference to his then upcoming film, Salò, or the 120 Days Of Sodom, an adaptation of the Marquis de Sade’s controversial novel transposed to the waning days of Italian fascism. This penchant for scandal, in both life and death, is what is best remembered about Pasolini and has proved to be his lasting influence. But it has been simplified — his name has become synonymous with rebelliousness, and been absorbed into the culture industry. How he scandalized is overshadowed, the actual work — more complicated than a simple declaration — overlooked. Still from Pier Paolo Pasolini, Salò, or the 120 Days Of Sodom, (all images courtesy Park Circus)

The first of a three-part retrospective of Pasolini’s films began at Metrograph in New York City on January 4, starting at the end of Pasolini’s career. (The last two parts of the series will be spread out throughout the year.) It is here that his work is both nimble and nefarious, loose and striking. By this point, he had moved away from the neorealist tales set among the lower classes and moved deeper into scurrilous provocations that increasingly nudged the puritanism of the Italian public. The films he produced during the last five years of his life are among his most conflicted, both comic and punishing. They are difficult to watch and, for the most part, thoroughly enjoyable.

This contradiction extended beyond Pasolini’s films. In his writing, including newspaper and magazine editorials that increased his notoriety, he chastised both the right and the left, inviting scorn for his embrace of contradiction. At one moment, he would align himself with the student movement and the next chastise them for what he viewed as their reliance on bourgeois values. It was difficult to predict what Pasolini might say about a particular subject, his opinions always shifting, evolving, refusing to stay in place.

Movement is one of the key elements of the “Trilogy of Life,” series of adaptations of canonical works of literature he made in the early 1970s. Starting with The Decameron, based on the novel by Giovanni Boccaccio, and later with The Canterbury Tales and Arabian Nights, Pasolini looked back on the past to make films about the present. They are scattered films, embracing the narrative fluidity of the source material. But they are also attempts to make popular works, combining pre-modern texts with contemporary sexual mores. There is gay and straight sex, piss and shit, and shenanigans. The films are made to attract and offend, and contain a sense of bawdry fun that is generally not attributed to his  work. The moral questioning of his earlier films turns into guttural humor. Pasolini appears in both The Decameron and The Canterbury Tales as characters but also as himself, winking at the viewer with trollish élan.

Another turn, which proved to be his last, came with Salò. Looking at it now, the real scandal over the film is less in its content — which is still relentless and hard to watch — but in how the material is presented. The beauty of the simple framing and the elegant design works in contrast to the extreme violence and degradation. We are drawn in and pushed away, forced to watch and condemned for watching. The two elements are inseparable. It is a dark film, to be sure, but it’s darkness, sadly, is the only thing that remains in the popular imagination.

And this darkness has proven to be his lasting legacy. Since his murder in 1975 on the beach at Ostia, near the outskirts of Rome, Pasolini’s inspiration has traveled widely. It has become grist for the mill of the fashion industry, with the designer Gosha Rubchinskiy claiming Pasolini’s death as an influence for her spring 2017 menswear collection, and Mario Testino setting the afterparty for one of his 2011 fashion shows at the restaurant where Pasolini ate his last meal.

These citations freeze Pasolini in history. There have been other examples — artists such as Carlos Reyes, Alfredo Jaar, and Elisabetta Benassi — who have all better explored his life and death in their work. But his biggest impact, best exemplified in the work made during the final years of his life, was the refusal to provide an easy meaning. The films still confuse, rattle, and annoy, turn when you want them to stop, and remain frighteningly still when you want them to move. Pleasure is found in their refusal to be just one thing. The true scandal resides in their continued resistance to be defined.

To Pessoa and Saramago: a poetry homage by Opiemme in Lisbon, Portugal.
0 (0)