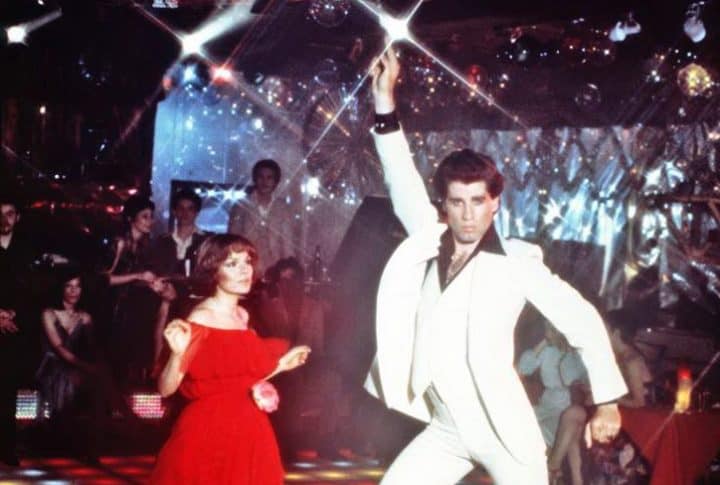 The June 7, 1976 issue of New York Magazine featured the story Tribal Rights of Saturday Night. Nik Cohn had insight into a new youth culture. He introduced us to Vincent, the “Ultimate Face” of disco. Cohn was a respected writer and pop culture Face. His obsession with pinball was the inspiration for The Who’s song Pinball Wizard.

Over the past few months, much of my time has been spent in watching this new generation. Moving from neighborhood to neighborhood, from disco to disco, an explorer out of my depth, I have tried to learn the patterns, the old/new tribal rites. In the present article, I have focused on one club and one tight-knit group which seem to sum up the experience as a whole. Artist James McMullan also spent many hours observing this development, but his paintings, reproduced here, are less specific; although they deal with the same locations and group, they are generalized images of these Saturday night rituals. Was it all true? He said it was:

Everything described in this article is factual and was either witnessed by me or told to me directly by the people involved. Only the names of the main characters have been changed.

Vincent was a dancer. And every Saturday night he and thousands of others like him for whom Manhattan was another country “exploded”:

Vincent was the very best dancer in Bay Ridge—the ultimate Face. He owned fourteen floral shirts, five suits, eight pairs of shoes, three overcoats, and had appeared on American Bandstand. Sometimes music people came out from Manhattan to watch him, and one man who owned a club on the East Side had even offered him a contract. A hundred dollars a week. Just to dance.

Vincent would be immortalised in film as Saturday Night Fever’s Tony Manero, the 1977 hit that turbo-charged John Travolta’s career.

The producer Robert Stigwood came calling, and, in December 1977, Cohn found himself attending the premiere of Saturday Night Fever at Grauman’s Chinese Theater with the disco chanteuse Yvonne Elliman on his arm.

Elliman’s sang If I Can’t Have You, a song written by Barry, Robin and Maurice Gibb  (The Bee Gees) in 1977. It features on the Saturday Night Fever soundtrack. In December 1977, The Bee Gees’ version appeared as the B-side of Stayin’ Alive.

On the back of Cohn’s article, reputations were made, fame and fortune secured. The pose that launched a thousand wedding dances

Did Vincent ever get in touch, or at least dine out on his link to such an era-defining movie? You can look through newspaper archives and more for signs of Vincent. He’s notable by his absence.

If he never found the Press, maybe the media found him? Cohn’s story even gave directions to Vincent’s home: “He lived on the eleventh floor of a high-rise on Fourth Avenue and 66th Street, close beside the subway tracks, with the remnants of his family.”

You wanted more clues to spotting Vincent? Cohn had plenty:

His father, a thief, was in jail, and his oldest brother had been killed in Vietnam. His second brother was in the hospital, had been there almost a year, recovering from a car crash that had crushed his legs. His third brother had moved away to Manhattan, into the Village, because he said he needed to be free and find himself. So that left only Vincent, his mother, and his two younger sisters, Maria and Bea (short for Beata), who were still in school.

Between them they shared three rooms, high up in a block of buildings like a barracks. His windows looked out on nothing but walls, and there was the strangest, most disturbing smell, which no amount of cleaning could ever quite destroy.

Hard to describe it, this smell; hard to pin it down. Sometimes it seemed like drains, sometimes like a lack of oxygen, and sometimes just like death, the corpse of some decaying animal buried deep in the walls. Whichever, Vincent wanted out. He would have given anything. But there was no chance. How could there be? He could never abandon his mother. “You must understand,” he said. “I am the man.” Brooklyn in the 1970s, by Irwin Klein

Did anybody other than Cohn ever find Vincent? No. Cohn invented him. He told the Guardian in 1994 (via Charlie LeDuff in the NY Times):

My story was a fraud, I’d only recently arrived in New York. Far from being steeped in Brooklyn street life, I hardly knew the place. As for Vincent, my story’s hero, he was largely inspired by a Shepherd’s Bush mod whom I’d known in the Sixties, a one-time king of Goldhawk Road.

Shepherd’s Bush is to the east of Brooklyn. In London. Spurred in part by retroactive conscience, I began to put in hard time in Brooklyn, steeping myself in Bay Ridge lore. Gradually, my invention became real to me; my hero came to life. In my imagination, I kept a detailed log of his progress, tracking him as he changed jobs, moved away from home, grew out of disco, left the neighborhood and then returned. I noted his marriage, the birth of his two daughters; watched him pick up a gambling problem; saw him slither toward middle age.

The artist James McMullan, who painted the drawings from photographs, said he was never allowed to meet Vincent. “Nik would shuttle people into another room to interview them,” Mr. McMullan said. “People mistakenly believed that the picture of the handsome kid was Vinnie. It was not.” Cohn enlarged on his fable:

The real story went like this: in 1976 Cohn met a disco dancer named Tu Sweet, who introduced him to the clubs of New York, including one in Bay Ridge called 2001 Odyssey. One night the two trawled through the underbelly of New York – a land of auto shops, transmission specialists and alignment centres – to find the place. A drunken brawl was in progress and as Cohn opened the cab door one of the guys reeled over the gutter and threw up over his trouser leg. So he just upped and returned to the safe comforts of Manhattan.

One image stayed with the writer, though, that of a figure in flared crimson pants and a black body shirt standing in the doorway of the club and calmly watching the action. There was a style about him, Cohn said, a sense of his own specialness that reminded the writer of a teen gang in his hometown of Derry and a mod named Chris he’d met in London in 1965.

When Cohn went back to Odyssey he didn’t see the young man in the doorway again. “Plus, I made a lousy interviewer,” he wrote. “I knew nothing about this world, and it showed. Quite literally, I didn’t speak the language. So I faked it. I conjured up the story of the figure in the doorway, and named him Vincent. Taking all I knew about the snake-charmer in Derry and, more especially, about Chris the mod in London, I translated them as best I could to Brooklyn. Then I went back to Bay Ridge in daylight and noted the major landmarks. I walked some streets, went into a couple of stores. Studied the clothes, the gestures, the walks. Imagined how it would feel to burn up, all caged energies, with no outlet but the dancefloor and the rituals of Saturday night. Finally, I wrote it all up. And presented it as fact.”

As for Cohn, this footnote adds a level of intrigue to the fable:

Mr. Cohn continued to write for New York magazine. In 1983, he was indicted on drug trafficing and conspiracy counts for the importation of $4 million worth of Indian heroin. He later pleaded guilty to a lesser charge in exchange for his testimony. He was fined $5,000 and given five years probation.

And that’s another story.

Rising: Topaz Jones and the Philosophy of the Groove – @Pitchfork0 (0)