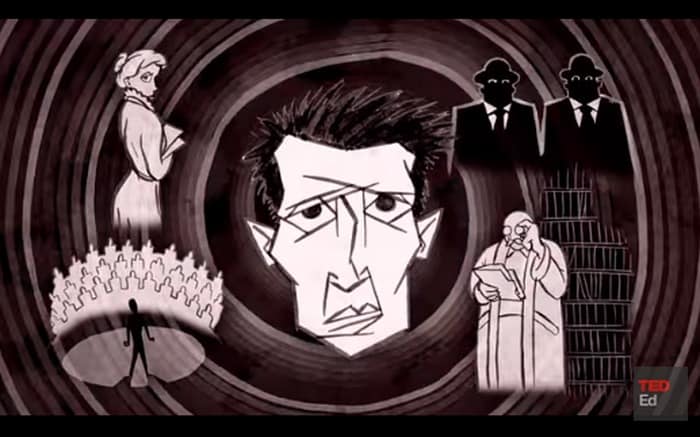 We derive adjectives from great writers’ names meant to encapsulate entire philosophies or modes of expression. We have the Homeric, the Shakespearean, the Joycean, etc. Two such adjectives that seem to apply most to our contemporary condition sadly express much darker, more cramped visions than these: “Orwellian” and “Kafkaesque.” These adjectives also—suggests writer Noah Tavlin—name two of the most misunderstood of authorial visions. In a TEDEd last year, Tavlin attempted to clear up confusion about the “Orwellian,” a term that’s tossed around by pundits like a political Frisbee.

Tavlin returns in the above to explain the meaning of “Kafkaesque,” a less-abused descriptor but one we still may not fully appreciate. He begins with a brief summary of Kafka’s novel The Trial, in which “K, the protagonist, is arrested out of nowhere and made to go through a bewildering process where neither the cause of his arrest nor the nature of the judicial proceedings are made clear to him.” The scenario is “considered so characteristic of Kafka’s work” that scholars use the term to describe it. Kafkaesque has become evocative of all “unnecessarily complicated and frustrating experiences, like being forced to navigate labyrinths of bureaucracy.” 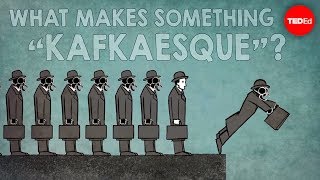 But the word is much richer than such casual usage as describing a trip to the DMV.
Tavlin references Kafka’s story “Poseiden,” in which the god of the sea can neither explore nor enjoy his realm because he is buried under mountains of paperwork. In truth, he is “a prisoner of his own ego,” unwilling to delegate because he sees his underlings as unworthy of the task. This story, Tavlin argues, “contains all of the elements that make for a truly Kafkaesque scenario.”
It’s not the absurdity of bureaucracy alone, but the irony of the character’s circular reasoning in reaction to it, that is emblematic of Kafka’s writing. His tragicomic stories act as a form of mythology for the modern industrial age, employing dream logic to explore the relationships between systems of arbitrary power and the individuals caught up in them.
Tavlin refers to The Metamorphosis and “A Hunger Artist” as further examples of how Kafka’s characters overcomplicate their own lives through their fanatical, singular devotion to absurd conditions.
But as Tavlin admits later in the , the bewildering mechanisms of power in stories such as The Trial also “point to something much more sinister”—the idea that arcane bureaucracies become self-perpetuating and operate independently of the people supposedly in power, who are themselves reduced to functionaries of mysterious, unaccountable forces. Tavlin quotes Hannah Arendt, who studied the totalitarian nightmares Kafka presciently foresaw, and wrote of “tyranny without a tyrant.” More recently, philosopher Manuel De Landa has theorized increasingly complex, impersonal systems operating with little need for human intervention. His War in the Age of Intelligent Machines, for example, imagines modern warfare as the evolving operations of more-or-less self-organizing weapons systems. Theorists frequently observe that the speed of technological advancement now proceeds at such a dizzyingly exponential rate that it will soon surpass our ability to control or understand it at all. Perhaps, as Tesla’s Elon Musk suggests, we ourselves are no more than operations in a complex system, simulated beings inside a computer program.
But scenarios like De Landa’s and Musk’s are also not the Kafkaesque, for these theorists of modern technocracy lack a key feature of Kafka’s vision—his dark, tragicomic, absurdist sense of humor, which permeates even his bleakest visions. On the one hand, Tavlin says, we “rely on increasingly convoluted systems of administration” and find ourselves judged and ruled over “by people we can’t see according to rules we don’t know”—a situation bound to provoke profound anxiety and psychological distress. On the other hand, Kafka’s attention to the absurd, “reflects our comings back at ourselves,” reminding us that “the world we live in is one we created.” I’m not so sure, as Tavlin concludes, that Kafka believed we have the “power to change for the better” the overcomplicated systems we barely understand. Kafka’s comic vision, I think, ultimately partakes in Miguel de Unamuno called “the tragic sense of life.” But he not fully deny his characters all freedom of choice, even if they frequently have no idea it is they’re choosing between or why.
Note: You can download essential works by Franz Kafka as free audiobooks if you sign up for a 30-Day Free Trial with Audible. You get two free audiobooks with each trial. Find more information on that program here.

Montreux Through The Decades: Jazz Recordings, Part One – @All About Jazz0 (0)

No Thoughts on What Does Kafkaesque Really Mean? A Short Animated Video Explains – @Open Culture0 (0)