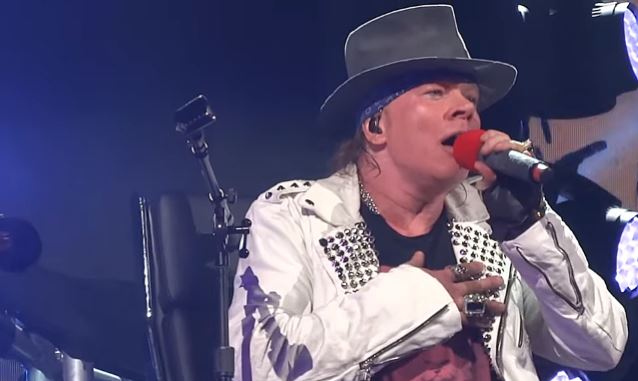 GUNS N’ ROSES singer Axl Rose will officially front AC/DC when the legendary rockers resume their “Rock Or Bust” world tour in May. The European stadium tour dates begin on May 7 in Lisbon, Portugal and run through June 12 in Aarhus, Denmark, as previously announced. Following this European run of dates with AC/DC, Axl Rose will head out on his GUNS N’ ROSES “Not In This Lifetime” summer stadium tour.

The ten postponed AC/DC U.S shows will be rescheduled and announced imminently, also with Axl Rose.

Commented AC/DC in a statement: “AC/DC band members would like to thank Brian Johnson for his contributions and dedication to the band throughout the years. We wish him all the best with his hearing issues and future ventures.

“As much as we want this tour to end as it started, we understand, respect and support Brian‘s decision to stop touring and save his hearing. We are dedicated to fulfilling the remainder of our touring commitments to everyone that has supported us over the years, and are fortunate that Axl Rose has kindly offered his support to help us fulfill this commitment.”

A rumor started last month suggesting Axl would perform as a guest vocalist with AC/DC gained traction after Atlanta Rock 100.5 host Jason Bailey claimed that a “very, very good source” confirmed to him that the collaboration was happening.

The rumor began after AC/DC postponed the North American shows. The band promised to make up the gigs, possibly with “guest vocalists.” Rose was spotted and photographed in Atlanta, where AC/DC was reportedly meeting with potential singers.

Brian Johnson‘s close friend, comedian Jim Breuer, recently said there he saw the singer in Sarasota, Florida on March 11, where Johnson told him that his doctor had confirmed some hearing loss during the first, mostly outdoor, leg of AC/DC‘s world tour. According to Breuer, Johnson said, “[The doctor said], ‘Now you’re gonna go out and do indoor [shows]? I do not put my name on this. You’re a grown man. You make a decision, but I would not mess around with this at all.'”

Johnson then went to guitarist Angus Young and AC/DC management to explain the situation, according to Breuer, who said: “[Brian] said that he called and let [AC/DC and Young] know, ‘Hey, this is what the doctor said, but let’s try to figure this out. I don’t think it’s as bad as he said it is.’ Literally the next day in the press, it was ‘Brian Johnson, tour canceled, he’s losing his hearing.'”

Breuer said that Johnson still felt like a “hired gun” after 36 years, and that Angus Young as the band’s youngest member wants to keep going for another decade and at least one more album and tour.

Johnson was AC/DC‘s singer since 1980, when he replaced the late Bon Scott. He made his recording debut with the group on the classic “Back In Black”.

AC/DC has been on the road since last year in support of its 16th studio album, “Rock Or Bust”.

The post: It’s Official: AXL ROSE To Front AC/DC On Upcoming Tour, was published at: Blabbermouth.net