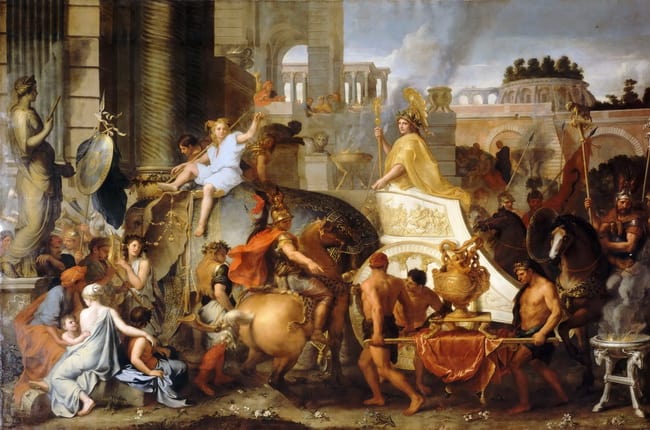 Retrospective of Charles Le Brun at the Louvre Lens – @The ArtWolf

The Louvre-Lens presents the 1rst major retrospective in over 50 years, dedicated to the work of Charles Le Brun, the most important artist in the late 17th century in France. May 18 – August 29, 2016.

The son of a simple monumental stonemason, Le Brun was appointed First Painter to Louis XIV, and held the position for almost thirty years. One of his most famous works is the Hall of Mirrors at the Palace of Versailles. Le Brun was also the Director of the French Royal Academy of Painting and Sculpture and of the Gobelins Royal Manufactory.

It was mainly through these official roles and his links with the country’s institutions that the name of Le Brun has gone down in history. Today, his work is still frequently likened to academic art, even propaganda. However, an examination of his work demonstrates the constant renewal and greatness of his inspiration. For example, did you realise that his depictions of animals are among the most expressive in all art? His talents are expressed just as well on a very grand scale – for example in tapestries and major decoration projects – as in more intimate sketches, which highlight the accuracy and emotion of his hand. With regard to his style, Bernini spoke of “abundance without confusion”, to describe the generosity, myriad nature and perfectly readable organisation of his work. This exhibition in Lens brings together 235 works, some of which are from private collections and have never been shown in public. Others are recent revelations, such as the “Sacrifice of Polyxena”, discovered in Coco Chanel’s suite at the Paris Ritz during renovations, and purchased by the New York Metropolitan Museum of Art in 2013. The exhibition does justice to the infinitely varied talent of a prodigy who came to light at the age of 15, and, just like Delacroix for Romanticism or Monet for Impressionism, is the sole embodiment of the art of an era: the Grand Siècle.

At a time when courtly European artists are being reassessed, Le Brun should form one of their numbers in France. A multi-talented genius, Le Brun can be compared to Bernini in Italy or Rubens around Europe. In the last decade, much new light has been cast on a number of aspects of Le Brun’s work. From the Pavilion of Aurore in Sceaux and the Apollo Gallery in the Louvre to the Hall of Mirrors at Versailles, the majority of his major decoration projects have been restored, and have resulted in major studies that summarise the history of the sites as well as the technical aspects of the restorations. Le Brun’s role as provider of sketches for the sculptors, weavers and goldsmiths to follow, each according to their own technique, has been the subject of specific exhibitions. However, there has never been a major retrospective of his work to provide an overview of his pathway.

This exhibition at the Louvre-Lens therefore intends to eschew the fragmented, over-specialised approach previously taken, to bring coherence to this figure, distinguished as he is by the multiplicity of his talents, the vivacity of his imagination and his talent for organisation. It was these qualities that justified the extent of the commissions awarded to him by Louis XIV and Colbert. If Le Brun were not the “dictator of the arts” under an absolute monarchy, he was undoubtedly their director.

The post: Retrospective of Charles Le Brun at the Louvre Lens, was published at: The ArtWolf