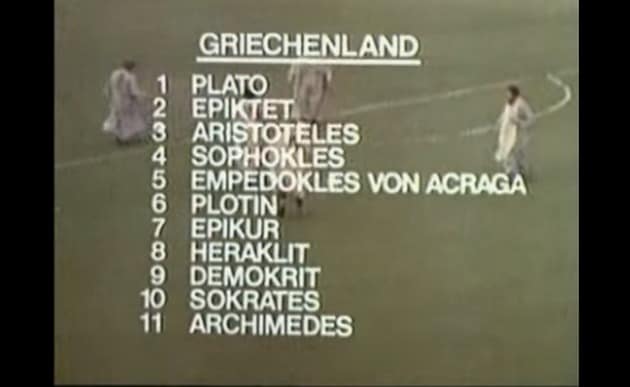 Last year, we witnessed a very tense, unpleasant showdown between Germany and Greece as the topmost nation in the European Union drove its most indebted country to make painful, perhaps punishing compromises. In one analysis of this hard-to-watch economic humiliation—for Greece, that is—The Washington Post made use of a much more lighthearted contest between the two countries, one in which Greece emerged the victor after scoring the only goal of the match.

The soccer match, that is, or, if you must, football—played between German and Greek philosophers in 1972 and staged by Monty Python. On one side, Hegel, Leibniz, Kant, Marx, Nietzsche, Wittgenstein, and more (including actual footballer Franz Beckenbauer, a “surprise inclusion”)… on the other, Socrates, Archimedes, Heraclitus, Plato, Democritus, Epictetus, etc…. On the sidelines of this showdown between Western schools of thought, Confucius served as the referee. Even after that single goal, scored after two full halves of meandering, the two teams came into conflict—in heated arguments about the nature of existence….
I won’t continue to bore you by explaining the gags—watch the sketch above. It’s great fun, if by some chance you haven’t seen it, and great fun to watch again if you have.
Filmed at the Grünwalder Stadion in Munich (presumably giving the Germans home field advantage), the sketch, Terry Jones recalled many years later, is about the “clash of opposites.” No, not the two European countries, but the opposites of sports and intellectual exercise. “You can’t think about football too much,” said Jones, “you just have to do it.” This proves challenging for our deep thinkers.
Why football? Because it’s “a team activity,” Jones answered, “which philosophy, as a general rule, isn’t.” Well, mostly. The Python’s weren’t the first to make the “incongruous” connection. Albert Camus played the game, as a goalkeeper, and played it quite well by all accounts. He once wrote, “all I know most surely about morality and obligations, I owe to football.”

The injunction to “just do it” wouldn’t present too much of a challenge for an existentialist, one would think. Philosopher Julian Baggini puts the Pythons firmly in that school of thought, their take on it a “coherent, Anglo-Saxon” one. Indeed, like Camus, the British comedians recognized the absurdity of life, and showed us that “the right response is to laugh at it.” They also showed us that philosophy could be hilarious, and made a classic sketch academics could use to refute charges they’re a dour, humorless lot.
It should come as no surprise that the Python “most interested in the subject” of philosophy and comedy was John Cleese—whom we’ve featured here many times for his talents in combining the two. Cleese, writes Baggini, is “on record as saying that comedy and deep thought can go hand in hand. ‘You and I could talk about the meaning of life, or education, or marriage,’ Cleese once told a journalist, ‘and we could be laughing a lot, and it doesn’t mean that what we’re talking about isn’t serious.’”
Inspired by the Python’s serio-comic love of learning, Baggini, and other philosophers like A.C. Grayling and Nigel Warburton, along with comedians, historians, and journalists, decided to restage the Germany-Greek match in 2010. Where the Pythons indirectly boosted intellectual pursuits in the course of mocking them, the participants in this “game”—such as it was—explicitly sought to promote “Reasoning,” the “fourth R” in “Reading, W(r)iting, and A(r)ithmetic.”
See them bumble around on the pitch above and generally have a good time making philosophical fools of themselves to the strains of Monty Python’s rowdy anthem “The Philosopher’s Song.”

The post: Monty Python’s Philosopher’s Football Match: The Epic Showdown Between the Greeks & Germans (1972), was published at: Open Culture

A Clever Supercut of Writers Struggling with Writer’s Block in 53 Films: From Barton Fink to The Royal Tenenbaums – @Open Culture
0 (0)