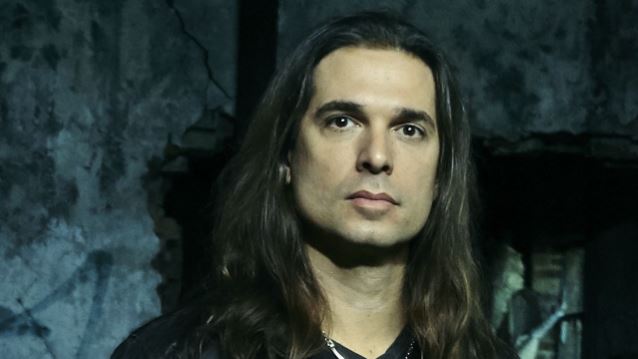 Holly of the South Orange, New Jersey radio station WSOU recently conducted an interview with MEGADETH guitarist Kiko Loureiro. You can now listen to the chat using the SoundCloud widget below. A couple of excerpts follow (transcribed by BLABBERMOUTH.NET)

Kiko: “I’m a fan of the band, and it’s very challenging, of course, my position, because so many great guitarists have been playing with MEGADETH all throughout these thirty years. And [it’s] not an easy spot [to be in]. But it’s great. [Dave] Mustaine [guitars/vocals], [David] Ellefson [bass], and now Chris Adler [drums]… [They are] great people. Great people to hang [with], to play [with], and to make music [with].”

On the differences between writing and recording with his Brazilian band ANGRA and MEGADETH:

Kiko: “Well, first [of all], to write the [new MEGADETH album] ‘Dystopia’, I was invited to the band, and then, like, a few weeks later, I was at the studio. So I basically met everyone at the studio. Of course, I didn’t start recording right away. I was kind of maybe three weeks there, watching Chris Adler recording the drums with his pre-production, so I kind of got to know the guys better. So that’s the big difference. When you’ve been playing in a band for many years and you know the guys for so long, and compare it to MEGADETH, [where] I knew the guys for a few weeks and I had to give my ideas or play with them. I think there’s a good side of that, [because] everything is fresh, the relationship is fresh, and everybody’s excited. But from the other side, I’m still learning what is MEGADETH, what is the concept of the band, how the fans react [to] the stuff. I didn’t know much about it. I mean, I know from the outside, but not from the inside perspective. So that’s different. Because, to give ideas, to understand exactly what the bad was and what the band wants to be, what was the concept before, what the concept [is] for the future…. But all the excitement and all the fresh feeling that you have is great. So I think in the end, with the [reaction from the] fans and the result of the album, you can see that it was a good thing to have this new moment, the freshness and just the excitement of joining the band and just working for those few weeks together and trying to create the best album ever.”

On what it has been like working with Dave Mustaine:

Kiko: “Yeah, of course, I came to the studio with this expectation that a lot of people have. And every interview I give, people are always asking, ‘How is to work with Mustaine?’ because he has this reputation to be this amazing guitarist, because sometimes he says stuff that people don’t agree [with] or whatever. But, to be honest, Dave, he’s just a super gentleman, first of all. When I met him the first time, when I was kind of auditioning to him, which was not really an audition; we just hung for a day in Nashville. He was showing me Nashville, we had lunch, we had coffee, beer at night. So I hung with him the whole day; I didn’t play at all for my, let’s say, ‘audition.’ So I discovered a very sharp guy, very intelligent. He knows a lot about music, and the band, MEGADETH music. He’s self-taught, so all the stuff he created he created by himself, so he knows a lot about that. He’s very into politics, he’s very sharp in the music business in general, and he’s a gentleman, I could say. So it was interesting to work with him. And at the studio, to compose with him… For me, I’ve been in the music business for so many years, I kind of respected his space, because he is the guy who was composing for MEGADETH for thirty years. So when I joined [the other guys] in the studio, I was more observing and analyzing them and trying to understand, and embracing his ideas and trying to make it a little bit better, if possible — you know, respecting his input in general. So I think that was a good way to work. And then slowly I was showing some other ideas and I think I just found a good way to interact with him. And so far it’s great the way we work together. And at the end, I could have some co-writing with him, because I needed that time to make him comfortable with my ideas and also for me to understand what is MEGADETH, what Dave wants from his band. And so like this I could really collaborate with him. I think it was not a big problem. It was really easy to work with him in a way, but you just have to first understand. He’s just like an interesting person, so you need some time to understand.”

On Mustaine calling him the best guitarist MEGADETH has had since Marty Friedman:

Kiko: “That’s great. He has been saying a lot of compliments to me, so it’s great. Of course, I’m very happy. The guitarists in MEGADETH, they were always great guys and great players, and I’m just hapy to be in the same level of all of the other ones. I’m a fan of all of them — [Chris] Broderick, Friedman and Chris Poland — and I’m having fun playing their stuff as well, because now, live, we’re playing all the catalog songs, so I play the solos of all the guys. So it’s fun. It’s great. I can see all the talent. So, yeah, of course, I’m super happy to be compared and to be in the place [like this] with all [the other] guys. Yeah, I think the thing is more, like, how to work in a band. I think at the end what I’m really experienced… Because I’ve been playing with the Brazilian band ANGRA, it was more than twenty years. And we’ve had members going in, going out, changing, all the ups and downs of [being in] a band, all the problems, all the fights… I’ve been through that a lot. And the band was quite successful… it is quite successful in South America and Japan, so I’ve been through that, and I have a lot of experience to be a bandmember, which is very different than being a session musician or being a sideman. I’m more like a bandmember guy, so I think I can put this expertise to be in MEGADETH as a bandmember. And then, I know how to interact and to compose and just to hang, or whatever, as a bandmember. And I think Dave liked that, so that’s why he has been… Maybe he’s not even aware of that — [maybe] he just thinks that I’m a great player — but I think there’s a lot of great players out there. But my experience of being a bandmember, with the ups and downs of a band for twenty years, gives me a lot of knowledge how to present myself and how to put myself in a band like MEGADETH.”

The post: MEGADETH’s KIKO LOUREIRO: DAVE MUSTAINE Is ‘A Super Gentleman’ Who Is ‘Really Easy’ To Work With, was published at: Blabbermouth.net

No Thoughts on Megadeth’s Kiko Loureiro: Dave Mustaine Is ‘A Super Gentleman’ Who Is ‘Really Easy’ To Work With – @Blabbermouth.net #megadeth #kikoloureiro #davemustaine0 (0)