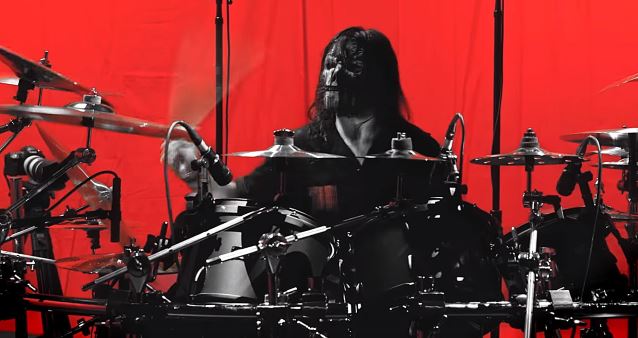 A three-minute video clip of SLIPKNOT‘s Jay Weinberg playing a drum solo on his Evans black chrome tom heads, heavyweight snare head and EMAD bass head can be seen below.

Weinberg recently told Evans drumheads about his approach to playing and achieving his sound:”I think when I really started to get into specific tones of drums and realizing how you can make a record sound like you’re right there with the drummer, that’s my favorite stuff — that’s what I love and try to accomplish for myself. I want that energy that I feel when I listen to this as a fan of music, I wanna play something that makes me feel alive, like that makes me feel alive.”

He continued: “Really, the school I went to was going to shows constantly — always watching the drummer. Watching how the drummer interacted with the band and how it just looked so fun. So I wanted that for myself.”

Weinberg added: “I grew up loving punk and hardcore bands where we’d play at the Knights Of Columbus or the VFW hall, and there’s kids stage diving, and most often you are right next to the drummer, ‘cause the place is that small. I live for that. So that energy, if you can somehow translate it and play it… you know, these audiences that we’re playing with SLIPKNOT, that’s a beautiful thing.”

SLIPKNOT singer Corey Taylor said that his band’s refusal to officially reveal the identities of its new drummer and bassist in 2014 and early 2015 was partly done out of respect to SLIPKNOT‘s original drummer, Joey Jordison, who was fired from the group in 2013.

Although fans had more or less deduced the musicians’ identities from clues in 2014, SLIPKNOT had been trying to keep their names off the record until last July when he openly spoke about them during an appearance on the “Talk Is Jericho” podcast.

In an interview with Eddie Trunk for the SiriusXM satellite radio show “Eddie Trunk Live”, Taylor was asked if SLIPKNOT was still keeping the identities of its newest members —Jay Weinberg and bassist Alessandro “Vman” Venturella — a secret.

“Everybody knows, but we’ve just kind of let it be,” Taylor responded. “‘Cause everybody was so up our ass to say who [our new drummer] was, and it was, like, you’re missing the point. You’re missing the point. Listen to us. It’s not about him. It’s about us. It’s not about any individual person. That’s why we kept it such arm’s length for the longest time. But people know that it’s Jay, people know that [our new bassist is] Alex. It’s out there. But because we let the music do the talking, it stopped being an issue. So it was kind of cool to see that reaction and see how it kind of turned on itself. People just stopped caring. It was just, like, who cares [who they are], individually? It’s SLIPKNOT again. And that was the whole point… And plus, a lot of it was out of respect for Joe. We parted ways for our reasons, and it was reasons that people really didn’t need to know about. So, for us, out of respect to him, out of respect to Jay, at the time, we were, like, ‘Look, we’re continuing on, and this is how we’re doing it. It doesn’t matter why. This is what we’re doing.'”

Weinberg is the son of Bruce Springsteen drummer Max Weinberg, who has “come to a couple” of SLIPKNOT shows since Jay joined the band, according to Corey. The vocalist added: “[Max] was bringing Jay to shows when [Jay] was 10 years old. [Jay] grew up a huge SLIPKNOT fan. I have a picture of he and I in the same rig from… I wanna say it was the Hammerstein Ballroom, and it was Halloween 2001, I think. And he’s been coming to shows since we played ‘Conan’ [the talk show hosted by Conan O’Brien], because Max was the bandleader on ‘Conan’. So he’s been a huge fan since then. He’s almost twenty years younger than us. It’s crazy.”

Venturella is a former guitar tech who has played with CRY FOR SILENCE and KROKODIL.

SLIPKNOT‘s original bassist Paul Gray passed away in May 2010 from an accidental overdose of drugs.

SLIPKNOT announced its split with Jordison in December 2013 but did not disclose the reasons for his exit. The drummer subsequently issued a statement saying that he did not quit the group.

Weinberg was previously in the punk band AGAINST ME! and left under less-than-friendly circumstances. AGAINST ME! singer Laura Jane Grace tweeted in 2014, “Dear SLIPKNOT, good luck with that. #shitbag.” 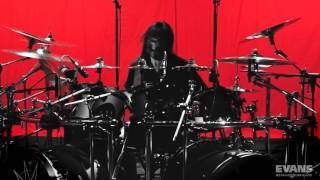 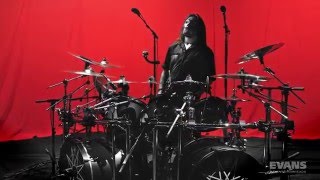